Scottish bread #1 - a Proustian moment with an Aberdeen buttery 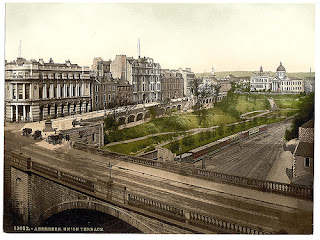 Aberdeen butteries, or 'rowies' as the locals call them, are the equivalent for me of the Proustian madeleine, though a good deal less elegant than their French counterpart. A good deal less elegant even, than their French alter ego, the croissant. For if you ask someone to describe a rowie, they will often compare them to a croissant, as they are made in a similar way, ie oooooodles of fat layered in dough to make a flaky bread roll. The high fat content is explained by their origin as food for fishermen to take out to sea with them - the fat kept them fresh a little longer than ordinary bread, and no doubt kept the fishermen nicely insulated against the cold North Sea winds if they ate enough of them, in the manner of seal blubber. But, being Scottish, the fat in question is not butter, or not entirely butter, but a mixture of butter and lard. And a whole heap of salt. They are shaped into roughly circular shapes and baked. Sound disgusting? Taste divine. Really. Yeasty, fatty, and utterly glorious. It's almost impossible to find good rowies outside the Aberdeenshire area. Our local Tescos here in Glasgow occasionally has them in stock, but they are a pale imitation of their more northerly cousin. But even these have the same characteristic flavour, and one bite takes me right back to the 70s.

My grandparents lived in Aberdeen, and every summer, we used to make the long drive up to visit them from the south-east of England in whatever clapped-out old jalopy my long-suffering father was driving that year. I can remember my maternal grandparents' house, where we used to stay, so clearly: the mangle in the kitchen; the walk-in larder which always had exotic biscuits in it; my grandfather's shed, where our seaside buckets and spades were kept for us; and his rows of neat raspberry canes and strawberry beds. You might be under the impression that 1970s Scotland would not be the place to buy fresh bread, but you would be very much mistaken. Every morning, we used to take the long walk down the brae to Kelly's of Cults to buy fresh rowies. Kelly's was arguably the best place to buy your rowies, although this topic would be hotly debated each year, with the relative merits of Kelly's and Aitken's rowies batted to and fro between the adults. See, you could almost be in a little village in la France profonde, such was the level of culinary debate. And there was you thinking Scotland is all deep-fried mars bars and fish suppers. We could choose our own in the shop, and I would always look for well-cooked ones with a crispy outside. We would then trot back up the hill, and then slather them in butter (just in case there wasn't enough in them already). Oh how I loved them.

Years later, after my grandparents died and when we no longer went so regularly to Aberdeen, my father decided that the absence of rowies from his life meant that he would have to make his own. He managed to get hold of a recipe from somewhere (in those pre-internet days that wasn't as easy as it sounds) and would spend hours in the kitchen, lovingly fashioning his butteries. They were never quite as good as the ones from the Aberdeen bakers, but he did make a pretty good stab at it.

Later still, after the advent of internet mail order, he discovered that Aitken's would deliver rowies, UK-wide. I will never forget the excitement in his voice when he phoned me one night and told me 'They are thundering down the A1 on the back of a lorry NOW!'. He was so thrilled.

In his honour, I've decided to have a bash at making my own. Elizabeth David has a recipe in English (*gasp*) Bread and Yeast Cookery. She says, rather puzzlingly:


They don't look as showy as croissants but, for all their homely appearance, I prefer them in some ways, because they are light and small and surprising.

Homely? Sure. But light? And small is somewhat odd too. My recollection is of a thing about the size of a side plate. I'm not at all sure she's eating the same thing as I was. So, I've decided to turn to the internet and see if I can't find someone a little more local to the north east who can provide me with a recipe. I'll post the results when I'm done.