Cooked breakfasts mostly make me feel like heaving. Unless, ironically, I actually feel like heaving to start with, in which case sausage and beans and a mug of builder's tea is just the ticket. The only time I can countenance a fry-up is after a heavy night of boozing, and since I can't bear the perfect storm of child + hangover, it's been a long time. I used to love picking up the Sunday papers and sitting with my best pal, grunting occasionally, in a greasy spoon on the Essex Road.

But I do feel that any self-respecting blog about breakfast needs to address the issue of the Full English. Or indeed the Full Scottish, which is the-same-but-different. My version would be pretty far from a proper Full English, because it wouldn't EVER include eggs. I have a long-held hatred of eggs. The same best friend will tell you 'Mrs B hates eggs, fairs, and horses'. In fact, I don't actually hate horses, I am just not a horsey person. And I like the idea of a fair, but not the expensive, vomit-inducing reality of a fair. But I really do hate eggs. So, for me, it's sausages, baked beans and chips, which is not at all traditional. If you're waiting for a recipe for the perfect scrambled eggs, it may be a long wait.

Since I don't 'do' cooked breakfasts, I'm cheating rather, because I've been drooling over a recipe for 'proper' baked beans for a few days, and I'm going to cook them for dinner, whilst presenting them to you as an idea for breakfast. When I put the haricot beans in to soak it all looked rather frugal, so at Mr B's insistence I doubled up the quantities and it now looks as if we may be eating them for breakfast, lunch and dinner for about a week, so I don't feel as if I'm cheating too much.

If you say 'baked beans' to a Brit, they'll almost certainly think of a tin of Heinz beans, but I want to try out proper baked beans, made from scratch. I think a tin of beans is actually a pretty great thing - I was probably about 75% baked bean when I was 10, and I still love beans on toast for dinner every now and then when the cupboard is bare. Only one of my children likes them though (same old...), so I'm hoping to lure my sausage-loving younger child in by depositing big chunks of smoked sausage in the beans before I give them to him tonight. It's a long shot.

We have finally come to the end of our Laura Ingalls Wilder odyssey - Laura's married, had a baby and burned her house down (did Ma teach her nothing about kitchen safety? Apparently not). Those pioneers ate a whole heap of salt pork, and used that to make their baked beans. The recipe I've used is by Rose Prince, from her lovely book The New English Table, with a few very minor tweaks, and uses bacon instead of salt pork, which is certainly easier to get hold of, and probably less fatty than salt pork. It also includes tomatoes, to make the result closer to our familiar British baked beans, although these wouldn't have been used in American baked beans. Fusion cuisine, if you will. My Little House Cookbook tells me that Puritan housewives would have sent their baked beans off to the local bakery to be cooked on a Saturday, to provide a hot meal for Saturday night and leftover cold food for the Sabbath, when work was forbidden.

I fear many of you are now sitting reading this with that scene from Blazin' Saddles in your heads, but fear not. Beans are great: cheap, nutritious, easy to cook, and perfect for a cold winter's night, with sausages or fried eggs. The fried eggs are Rose Prince's suggestion; obviously I would never suggest them myself. 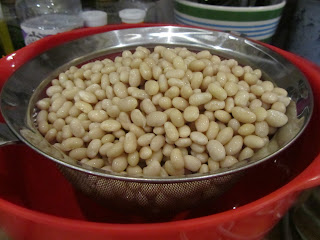 I found it surprisingly difficult to get hold of dried haricot beans - the main supermarkets only had the tinned kind, and I didn't want to use those for this, because it requires long slow cooking. As ever, the magnificent Whole Foods Market came to my rescue. So, if you can't find dried haricot beans in your local supermarket, try a whole food store.

It's almost as easy as opening a can really.

1. Soak about 350g of haricot beans in cold water overnight then drain (that's 350g beans in the  sieve above - that makes enough for about 4-6 big adults depending on what you're having with them).

2. Chop a large onion, and about 4 slices of back bacon - I used unsmoked. Don't chop it too small but cut the onion as finely as possible. Fry these in olive oil until soft. Use a heavy-bottomed casserole with a close-fitting lid (a cast iron casserole is ideal if you have one).

3. Add a 500g carton of passata, the beans and a big spoonful of molasses, add water so that the beans are well covered, and bring to a simmer. Cover the casserole with the lid and put in a lowish oven (about 150C) for about three hours, or until the beans are cooked.

4. Half an hour before you want to eat them, add a big dollop of mustard, a couple of tbs of worcestershire sauce and a little salt and return to the oven. 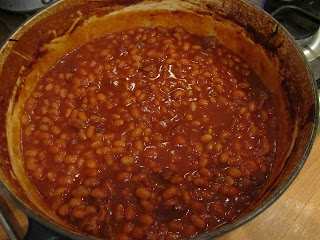 Post-match analysis: just in case you think my children are freaks who adore everything I lovingly prepare for them, the bean-hater was in no way fooled. When I insisted that he at least try it (after eating FOUR sausages), he put one bean in his mouth, whilst simultaneously wailing, weeping and shouting 'I can't eat it, I can't eat it!'.  The bean-lover was just about OK with it, though he regarded the addition of bacon with great suspicion.
Posted by breakfastlady at 16:33