Chestnuts roasting on an open fire. Or out of a jar, or a packet...

When we were on holiday in France in the summer - and doesn't that seem a long time ago now - I picked up a jar of this Bonne Maman chestnut cream, which had been recommended to me by a friend. 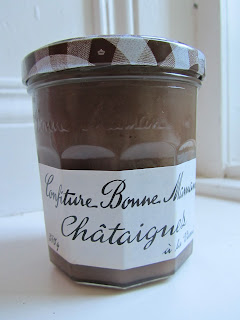 You can get most of the Bonne Maman range in the UK now, but this one is rather elusive. I haven't tried Waitrose, which would probably be the obvious place to look, but I can't see it on the Ocado website, and I haven't come across it anywhere else.

I'm not very familiar with the flavour of chestnuts as my mum never cooked with them when I was a child. They are used much more commonly in French cooking: you can buy chestnut mousse in multipacks alongside yogurt in French supermarkets and desserts such as the Mont Blanc are familiar to all French people. But they aren't used nearly so much in the UK, especially in sweet food. When I lived in London, it was common in the weeks leading up to Christmas to see freshly-roasted chestnuts being sold from stalls on the streets, but it's not something that I've seen in Scotland.  They do seem to have become more common at this time of year in supermarkets, especially vacuum-packed whole chestnuts, which many people use to make stuffing, and marrons glacés. I have no idea what people do with them - eat them straight? Use them for cake decorating? Bof, as the French would say, with a suitably Gallic shrug.

So, with only two weeks to go until Christmas, I've decided to crack open my jar of chestnut cream. I went out in search of chestnut flour, and managed to track some down at Whole Foods Market. 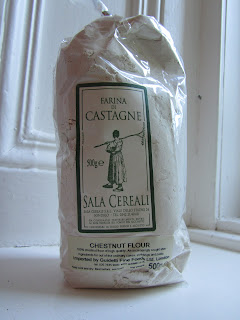 So, on the menu for breakfast this weekend - chestnut pancakes with chestnut cream. Chestnut flour, it turns out, is ruinously expensive, so this is really a recipe for special occasions - perhaps for Christmas morning, when you want something that will fill the children up for long enough to fuel a long morning of playing with new toys while they wait for the Christmas dinner. If you can't manage to track down the chestnut cream, the slightly nutty flavour of the pancakes would marry well with maple syrup and cream, or indeed with a nice smoky bacon. If you really want to go to town on Christmas morning, it would be nice to add some fresh or stewed fruit - perhaps raspberries or blueberries - to cut through the creaminess.

A final point to mention is that chestnut flour is gluten-free, so if this is an issue for you, it would make a great alternative to normal pancakes, or indeed to all the dough-based baking at Christmas, while still being a bit special for a feast day.


You can make thick or thin pancakes according to your taste - I prefer thicker, American-style pancakes for breakfast, but if you like crepes better then adjust the quantities (ie add more milk, and leave out the baking powder) to make a thinner batter.

If you are making these for Christmas, you can prepare the batter the night before and leave it in the fridge. It's always good to let pancake batter stand before you use it, and it gets another job out of the way for the big day.

This quantity makes enough for about 6-8 medium-sized pancakes. That's plenty for our family, as the boys don't eat more than one, but you might want to double it up if you're feeding adults or bigger children.

1. Mix the flour, sugar, baking powder and salt together in a bowl
2. In a separate bowl, beat the egg, and add the milk, sour cream and vanilla
3. Make a well in the flour and add the wet ingredients a little at a time. A stick blender or a hand-held electric whisk is the easiest way to do this, but it's easy to mix it by hand with a balloon whisk or even a fork if you don't have one.
4. Let the mixture stand for at least half an hour.
5. Before cooking, add the melted butter and stir to combine well.
6. Heat a little butter in a frying pan (it needs to be very hot), and drop in a small ladleful of the batter. Cook until small bubble appear on the surface of the batter and then flip and cook on the other side.
7. Transfer to plates and add the topping of your choice (see above) 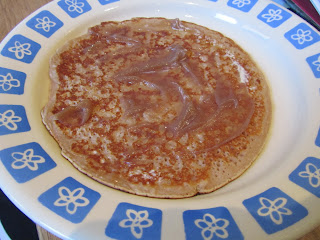 I've linked this post into the BritMums Blog hop - lots of lovely ideas in here for Christmas food, crafts and presents. Do have a look.