Thing Two has recently developed a fascination with Egyptian mummies. Most of his large collection of lego people has been prepared for the afterlife in toilet paper and sellotape. He has even written a how-to guide to mummification for his readers: 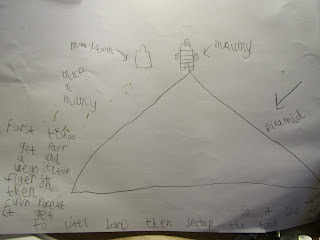 Being frightfully middle-class, we decided to kill off his interest entirely by taking him to see the real thing at Kelvingrove Museum. It turns out they actually have some sort of Ancient Egypt exhibition going on there at the moment, but we didn't have time to visit that and went instead to their small permanent exhibition. A kind lady shone the torch on her mobile so that Thing 2 could see the skeleton inside one of the sarcopho(er..-guses? ..-gi?) - he was very thrilled, so thank you whoever you are! He also got to confirm a fact told to him by his big brother - that the Ancient Egyptians removed the brains by sticking a hook up the dead person's nose and hoiking them out. This is a most marvellous thing if you are 5.

Anyway, our whistlestop tour of Ancient Egypt done with, we wandered through to a room where some game young ladies from the RSPB were teaching children about animal camouflage. The boys dutifully completed the educational quiz in order to get their hands on the glue. They were making Christmas tree decorations, featuring animals who are camouflaged in some way. Hurrah! I love home-made decorations. However, my joy was somewhat premature. Mr Breakfast and I, old lags in the kiddy craft game, stood to one side muttering darkly 'white glitter, white glitter, that's what this craft activity needs'. These animals are so well camouflaged with cotton wool that even an eagle would be hard-pressed to identify them.

This is what they produced for me to hang on the tree. 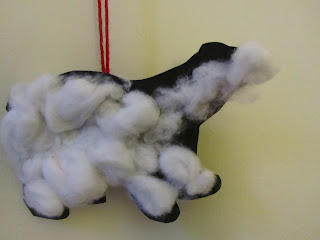 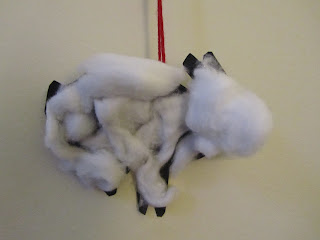 I am offering the prize of immense kudos to the first person who can correctly identify the two animals. I can show you what they are by photographing the other side - the cutouts were actually quite good. I will reveal their true identities on Christmas Eve (I bet you can hardly wait).

Meanwhile, I will hang them on my tree, and I will photograph my tree in order to keep the evidence of just how much I love my children, for use at a later date.
Posted by breakfastlady at 09:41