So, December. And ee but it's cold out there. Down jackets, fleecy boots and woolly hats a go-go. We've just had our first snow of the year (although the hills to the north have had a good coating for a week or two now). The boys are thrilled by any kind of snow, and seem to be as happy with the centimetre of wet slushy snow this morning as they were by the foot of snow we had a couple of years ago.

I resist Christmas for as long as possible in December, and refuse point blank to put the tree up until a week before Christmas. I'd hold out until Christmas Eve if I could resist the kiddy pressure any longer, but a week before is about as much as I can manage.

However, now that I'm a blogger, I seem to have been overtaken by the spirit of Christmas when the door has scarcely closed on November. I think it's all the lovely craft and food blogs out there. I can fairly smell the pine needles already. So, I've cracked open the Kate Rusby CD already and have been playing this, while making this (from Handmade Living magazine, via Miss Maker): 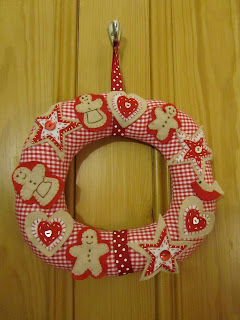 And the cake is made and packed away in layers of parchment and foil. Martha Stewart, eat your heart out.

I get terribly homesick for England at Christmas. You really can't beat a good English pub with a big fire at this time of year. This is something that Scotland is surprisingly bad at, especially in cities like Glasgow, where the choice seems to be flat-roofed, spit and sawdust or chain-pub with occasional gas flame fire and tartan upholstery if you're lucky. And even in the countryside it's frankly rather hit and miss.

So, with all this Yuleness, and feeling both freezing cold and very English, I have been rifling through recipe books in search of some good traditional English breakfast fare for this time of year, and here it is! The lardy cake. You can tell from the name that it's not going to be good for the waistline, so if you're on a strict pre-Christmas diet in training for mince pies and figgy pudding later this month, then look away now. If however, you are after something fruity and spicy and doughy that is as hearty as a full English breakfast, then this may be just the thing for you.

In fact, lardy cake is traditionally eaten at tea time, and generally as a celebration cake, rather than for breakfast, but hey. Fruit breads are perfect for breakfast, so why not, on a cold morning? It originates in Wiltshire, but there are versions from other parts of England such as Suffolk, Northumberland and Hampshire. Elizabeth David gives recipes for  some of these in English Bread and Yeast Cookery.

Essentially, a lardy cake is a fruit bread, with the addition of (ahem) quite a lot of lard. I must say that it is rather disconcerting to remove your bread from the oven to find it swimming in molten fat, which is then absorbed back into the loaf as it cools. Yikes. The resulting loaf is obviously very rich, and you won't need more than a few mouthfuls. My justification is that it's really no worse than having a croissant or a Danish for breakfast, only using lard rather than mounds of butter. Is that so much worse? Wikipedia tells me that lard is actually lower in saturated fat than lard, so make of that what you will.

I used Hugh Fearnley-Whittingstall's recipe from the River Cottage Bread Handbook, which uses only lard, but there are plenty of recipes on the internet using butter or a combination of butter and lard. Elizabeth David, however, insists that lardy cake should only be made with pork lard. I won't repeat the recipe here, as it's given in full on the link above, but here are some photos to tempt you... 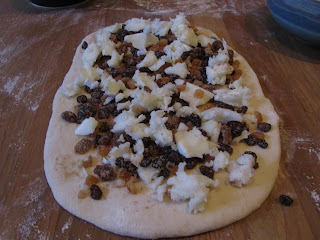 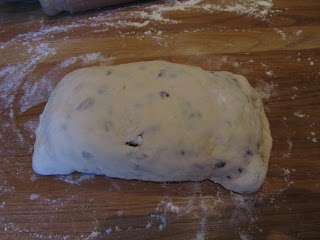 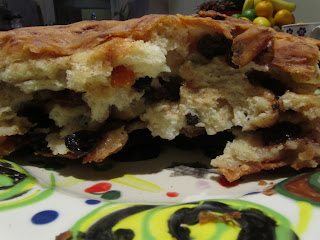 You can eat bran flakes for the rest of the month...