Are you a lover or a hater? 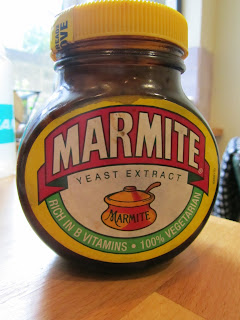 I'm afraid that this post will probably mean next to nothing to any readers outside the UK. For it is about Marmite, that love it or loathe it feature of the British breakfast table. For the uninitiated, it's yeast extract, and Marmite fans are usually extremely partial to a thin scraping of this salty, deeply savoury, sticky brown gunk on buttered toast.

I count myself among the lovers. I was brought up on Marmite and I absolutely love it. There are days when I'm not in the mood for the sweetness of cereal or honey or marmalade at breakfast, and Marmite is just the ticket. It's one of those things that can make my mouth water just thinking about it. I spent many of my formative years eating very little for lunch but Marmite sandwiches. The breakfastboys are split on the issue - youngest likes it, oldest hates it, and MrB has never liked it either.

Now, the other day, I chanced upon a tweet by Edesia's Kitchen which got my Marmite glands going straight away - a link to her recipe for Marmite Bread. Marmite and Cheese bread in fact. Now, youngest breakfastboy may like Marmite, but he doesn't like cheese, so there I had a conundrum. Two people who don't like Marmite, one person who doesn't like cheese, and me. Who loves cheese, and Marmite, and making bread. Well, what's a girl to do?

I'll give you one guess.

The recipe just told me to 'make the dough'. So I thought I'd just let the breadmaker do that bit - fling in the ingredients and leave it for a couple of hours, job done. Then you have to spread on the Marmite and the finely grated cheese, roll it up and 'knead it gently'. I'm not sure how 'integrated' the ingredients are supposed to be once kneaded and so mine was still quite 'rolled up' rather than one solid ball, and so tended to unravel a bit once it was cooked. 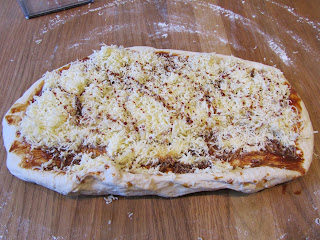 But oh my. The smell from the oven! And the taste! Quite the most moreish thing you can imagine. Edesia's Kitchen says she's done it as a 'tear and share' type loaf and I guess you could also do it as one of those 'monkey bread' loaves made up of small doughballs with stuff spread in between, piled into a loaf tin, which would overcome the unravelling thing. Or make it more of a feature anyway.

This is not, however, the end of the story. For a most remarkable thing happened. A thing that I have never heard of before. I'd been led to believe that the entire UK population can be divided into Marmite lovers and Marmite haters, and that any jump between the two is as impossible as it is for a horse to become a cow (outwith the processed food industry). But I can now reveal to you that erstwhile Marmite hater MrB is a convert. 'Mmmm', quoth he. 'This is great! So savoury!' And I've even caught him scarfing it between meals, so he definitely wans't just being polite.

Such was our haste in eating it that I clean forgot to take a picture of the finished article in all its glory. Oozing with cheesy marmitey bits and all golden brown on top.

So, go on. Try it. You too may see the light in the bottom of a Marmite pot.

Dictionary corner: language nerds, did you know that 'marmite' is the French for a cooking pot like the one on the Marmite label, and in fact the same shape as the Marmite jar itself - a sort of witch's cauldron?

Australasia corner: don't try to convince me that Vegemite is a. the same as or b. better than Marmite. It isn't the same AT ALL. That is my final word on the subject. <gavel>
Posted by breakfastlady at 14:01