The search for Borodinsky

I blogged a while ago about Tapa, a wonderful artisan bakery and cafe here in Glasgow. Their cafe food is really great, but their bread is really great. One of my friends, who shall remain nameless, and I, have been known to eat an entire (small) loaf of their courgette and carrot bread, toasted, in one sitting. That particular loaf has now sadly disappeared from their list, which is probably just as well for my waistline, but they still have all sorts of scrumptious loaves to choose from - sourdoughs, Scottish Struan (which has milk, honey and all sorts of grains and seeds in it), rye and caraway loaves, sunflower loaves, you name it. Take a look at their website for details.

One of my favourites is a loaf called a Borodinsky, which is a small sourdough rye loaf with a tangy flavour. While I was leafing through All You Knead is Bread the other day, I came across the Russian Rye recipe and it struck me that it sounded pretty close to the lovely Tapa Borodinsky - rye, molasses, and coriander (seeds and powder). So, I decided to give it a try. It's a very straighforward recipe - rye doesn't require kneading in the same way as wheat flour so it's a bit less sticky too. The Tapa version is a sourdough, but this one uses shop yeast instead, so it's probably a bit less refined than their version. By which I mean elegant, rather than processed of course.

I say a bit less sticky - in fact it is extremely sticky, it's just that you don't have to handle the stickiness much. As I plopped the dough into the pan I was reminded of something quite unspeakable, and was rather sad that the breakfastboys were at school and therefore unable to provide a colourful description of it for you. I will leave it to your imagination, and this here picture: 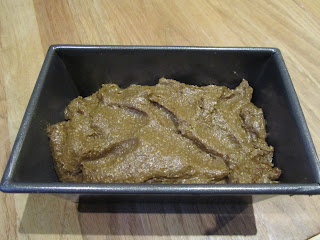 My first piece of advice to the home baker: do not try to paint a room and bake a loaf at the same time. Multitasking has its limits. The top is very slightly overcooked, but fortunately I was able to get down from my ladder in time to save it from complete incineration. Obviously, I am very far from being a master baker, so I'm never going to be able to emulate Tapa's wonderful master baker baked bread too well, but it was pretty good. The crumb could have been a wee bit lighter, but not bad for a first try. This is quite a lot darker than the Tapa Borodinsky. The recipe suggested using a combination of malt extract and molasses, but I didn't have any malt extract, so mine is just molasses, and I suspect that made it darker than it would have been otherwise. I'll have to try it again with a mixture of the two, and I might try a mixture of rye and wheat flours to see how that works. 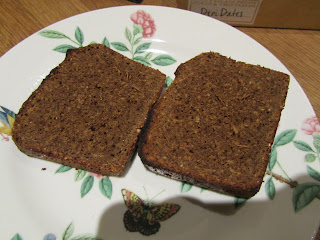 Ooh, and look, my sourdough starter has started to bubble. I'm delighted to say that my house is dirty enough to harbour wild yeasts. At last, my years of slatternly neglect of domestic duty are paying off. 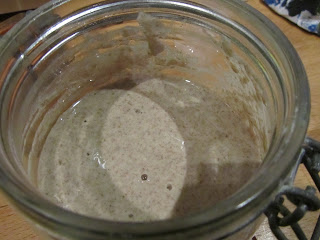