Baking on the wild side 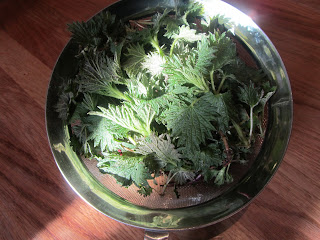 I have mixed feelings about nettles. All my gardening books tell me that they are good, that their presence in my garden means I have fertile soil, and that I should lovingly nurture a patch of nettles because they are an ideal food for loads of beneficial insects. On the other hand, I think I have the fiercest stinging nettles in the known universe growing on my patch. You can honestly feel the sting for days afterwards.

Nettles are also, it turns out, frightfully good for you: high in vitamin A, vitamin C, iron, potassium, manganese, and calcium. Not bad for something that grows like, well, a weed, in my garden. I love the idea of eating your weeds - possibly the only way in which I can demonstrate mastery over my very unruly garden is by eating it.  And early spring is the perfect time to eat nettles (I think in this bizarre year late April counts as 'early spring', right?). You pick just the very young growing tips.

Most people who cook with nettles make soup, but you can also chop them into a tortilla, or use them to make a pesto (in the same way you might with wild garlic), but I decided to use them to make some bread, after I came across a recipe for nettle knots in Hanne Risgaard's lovely book 'Home Baked'. This has to be the most beautifully illustrated cookbook ever - full of photos of billowing fields of wheat and rye in her native Denmark, where she grows and mills cereal crops on her family farm.Being Danish, it has a Scandinavian flavour - lots of rye, but also lots of spelt, and some interesting ingredients like elderflowers and, as here, nettles, that can be picked wild.

Anyway, I digress. The recipe uses chopped nettles in a fairly rich dough which includes milk and a beaten egg as the liquid. I used unbleached white flour from Gilchester's Mill in Northumberland, with a touch of wholemeal. The end result may look like one of those fake dog poos that so amuse the smallest breakfastboy, but do not be fooled: inside they are soft and lovely, not dissimilar to a bagel. I toasted some cheese on top of a split knot for lunch and we're having the rest with a butternut squash and coconut soup for dinner tonight. And never fear, there's not a hint of a sting when you eat them. However, I must point out that even once finely chopped - and that is the best use for a mezzaluna I have yet found - the stings are very much present when you knead the dough. I didn't follow the kneading instructions, as I'm still on a kneading-lite regime on account of my dodgy wrists, but used Dan Lepard's method of giving the dough a number of very light, quick kneads, and I then let it rise overnight in the fridge to avoid middle of the night baking. But even so, I managed to sustain a few stings. You might want to wear gloves, but that seems a bit weird. 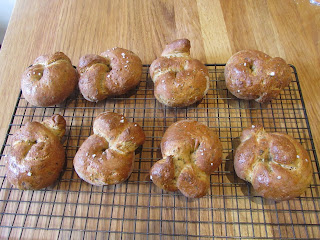 So, if you're doing a little spring weeding in the garden, or foraging in the woods for wild garlic, spare a thought for nettles and get picking (carefully). If you can't get hold of the recipe I used, you could substitute nettles in another bread recipe - perhaps one that uses chives or wild garlic, or even one with seaweed like the one in Richard Bertinet's Dough. You get the picture. Jazz baking. 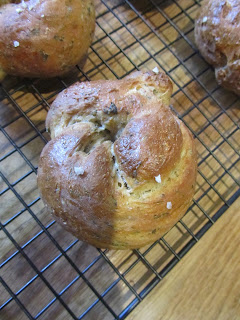