You'd think that seaweed I mentioned the other week would be a pile of green slime by now, wouldn't you? Well, no, turns out it's preserved in salt and good until July, thereby giving me weeks to get round to deciding what to do with it.

A few months ago I went to visit the lovely people at Breadshare in West Lothian, and they showed me a packet of their new product - seaweed oatcakes. The baker explained that they are great for cooking in a cooling bread oven, once your day's baking is over, thereby using the energy you've already paid for - canny Scottish bakers (actually, he wasn't Scottish, but never mind)!

Last weekend, a new shop opened in Glasgow called Locavore. It's a great place: they sell veg bags of seasonal produce, as well as locally-sourced produce, and aim to be a hub for local food production, with cookery classes, community gardening etc. And as my beady eye scanned the shelves, what should I spot but a basket of Breadshare oatcakes. So I snapped them up, and have hardly stopped eating them since. They are deliciously crumbly, with a hint of seaweed. Yum. Oats and fish have a long association in Scottish cooking - oatmeal-coated mackerel and herring is still a popular dish. So the addition of seaweed seems perfectly natural. And an oatcake topped with smoked mackerel pate or a sliver of smoked salmon is a fine thing indeed.

Interesting (if somewhat revolting) fact: in the days when the herring fleet used to follow the migration of herring round the British coast, teams of fishwives (and fishgirls) used to follow the fleet round the coast from Shetland right down as far as Yarmouth, spending time in the different ports, gutting and packing the herring in barrels of salt. The salt used to eat away at the webbed bit of skin between their fingers, and they would stuff the resulting holes with oatmeal, which is often still used to help skin complaints such as eczema.#truefact I admit it's not terribly appetizing, as facts go, but I kind of love the fish and oatmeal and sea connection, as applied to healing - there is a completeness to it that appeals to my inner organiser. I must also declare a slight obsession with the lives of the fisherfolk of Scotland. It must be my Aberdonian genes. If you look at old photos of the herring 'quines', they all look as if they are having the time of their lives, despite the fact that it must have been back-breaking work for little financial reward. See here for example:

Anyway, I digress (as usual). I decided that I would try to replicate the seaweed oatcake in my own oven, and here is the result: 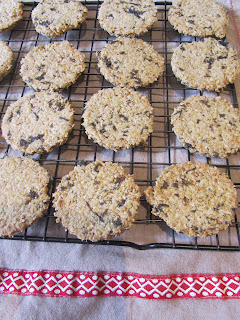 My recipe is based on Hugh Fearnley-Whittingstall's recipe here, with a few tweaks. I used rapeseed oil rather than olive oil in an attempt to keep my recipe local in the spirit of Breadshare and Locavore. I also used slightly more oats and oatmeal (150g of each), as I was going to be adding in the wet seaweed. I've reduced the amount of salt in the recipe too, on account of the seaweed. I just added a handful of seaweed (what my Scottish mother would refer to as 'a goupinfae'. I've no idea how one goes about spelling that, but it means something like 'oh you know how much, as much as you need, a sort of dollopsworth'), which I had rinsed, squeezed out and chopped fairly finely. Finally, I didn't use flour for dusting the worksurface as I wanted these to be wheat-free. I'm really pleased with them. Next stop cheesy oatcakes. How I LOVE a cheesy oatcake! 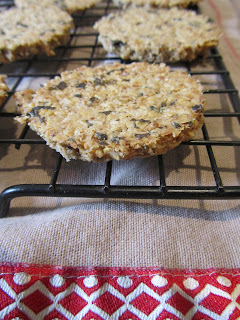 Oatcakes are so easy-peasy, so very good for you (esp if made, as here, with rapeseed oil), and very quick - you can rustle these up in about 45 minutes start to finish.

Turns out also that once you start rinsing the salt of it sort of expands into long gloopy strands, so I actually still have loads left. Watch this space. Seaweed, it's the new kale.
Posted by breakfastlady at 14:51