Just back from a week of R&R. We were out of phone and internet range (I know - quaint, huh?) and a bit distracted by the views so no blogging for a few days. It was good to walk off a few of the heartier breakfasts: 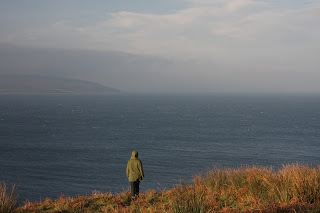 Now, to pancakes. Once you start with pancakes, it's difficult to know where to stop. I guess because they're so quick and economical to cook, they feature in the cuisine of more or less every country in one form or other.  However, when I think of breakfast pancakes, I think of thick American pancakes, which are a regular weekend breakfast for us. We usually use Nigella's recipe from Domestic Goddess as our default, and plop in a handful of frozen blueberries while the batter is still wet in the pan. Once the pancake is cooked, the blueberries are done. We usually serve with a wee bit of maple syrup and cream. It is the weekend, after all.

We've been reading Laura Ingalls Wilder's Little House books with the children  recently.  If, like me, you were reared on the slightly saccharine 70s TV version, I encourage you to read the books - their life was a lot more rugged than the TV version. In fact, they're currently stuck in the middle of a particularly hard winter in Dakota territory, where all the food has run out and poor old Ma Ingalls is reduced to hand-grinding wheat to make bread (in a tiny coffee grinder). Wait though. You think that's bad? This is shortly before the bit when Pa's hair gets eaten by mice. While he's still wearing it. Like I said, rugged. It kind of puts Sainsbury's supply issues into perspective. Anyway, I digress. The Ingalls family were keen on pancakes. In the big woods of Wisconsin, the family tap their own maple syrup and eat pancakes with this. Sometimes, Ma makes them into little pancake men. She does it freehand; do not make the mistake, as I did, of trying it with a gingerbread man cutter in the pan. You're liable to end up with a one-armed civil war veteran of a pancake. Later on in Dakota, Laura's future husband, Almanzo Wilder, rustles up a big pile of buckwheat pancakes for Pa Ingalls with molasses and ham from his family's farm. The rest of the town are starving at the time, and I note that Pa doesn't seem to mention to his family when he gets home that he's just had a slap-up feed chez Wilder.

When we started reading the books, we were a bit confused by some of the dishes mentioned, many of which are unfamiliar to my 21st century British ears, so I picked up a copy of Barbara M Walker's Little House Cookbook, which is great fun. It describes all the dishes in detail, and gives recipes for many of them. Including, should you feel the urge, a recipe for blackbird pie. As it's apparently illegal to kill blackbirds in the US, she suggests using starlings, with the rather chilling caveat, 'Starlings cannot be bought; they must be hunted'. The local starlings are safe, since I don't have the wherewithal to go a-huntin', but I thought I'd try and make some proper pioneer-style pancakes. If they're horrid, it'll at least teach my children to appreciate what they have, which Ma Ingalls would consider a fine lesson.

I'll post the results of the pancake extravaganza in a couple of days, once the hard drive with all my photos on it has returned from a wee trip to London...
Posted by breakfastlady at 11:14