My oldest son does not like fruit. This morning I asked him to write me a list of fruit he would willingly eat if I bought it for him. Here is his list: 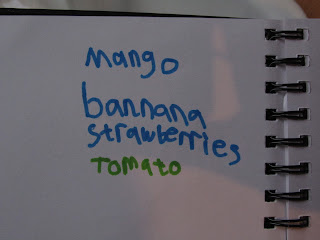 I let him have tomatoes because technically he's right, and I was quite impressed that he knew this (he's 6). Also, it would be an even more woeful list without tomatoes.

He'll also countenance various other fruits in puddings or smoothies, but he would no sooner pluck an apple from the fruit bowl than saw his own arm off. I know I don't have it nearly as bad as some parents - he would eat spinach pasta until it was coming out of his ears, and he orders fish and chips at school, eats the fish and leaves the chips. But I still mourn the days when he used to eat blueberries as if they were sweeties.

I've found two ways to get round his aversion. The first is to melt a bar of chocolate in the microwave, mix it with a pot of custard, chop up bits of various fruits (bananas and strawberries and  mangoes, obviously, but he might just be persuaded to eat a cherry or a raspberry this way), decant the custard into little ramekins and serve it up as 'chocolate fondue'. I'm not in the habit of serving custard for breakfast though, and I can think of better ways to start my day than peeling mangoes and pineapples.

The second is bircher muesli. Now, my son and heir is mad for porridge, and bircher muesli is not a million miles from porridge I guess, but he absolutely laps this up. There are many ways to skin the bircher cat. Hugh Fearnley-Whittingstall likes dried apricots on his, and Gordon Ramsay uses milk rather than OJ, and adds toasted walnuts (yum). Here's my son's favourite though:

I usually make up a big jar of muesli base, mostly rolled oats, with seeds added (sunflower/pumpkin is my usual, but you could add sesame or linseeds, or nuts if you prefer), and dried fruit (I use raisins and dates, but again, whatever floats your boat). If you're feeling really lazy, Waitrose do bags of bircher muesli base. It contains dried raspberries, which would be viewed with great suspicion by my son, so I haven't tried it, and it's really no hassle to make up a jar of the base once every few weeks.

He usually takes this to school for his morning snack rather than having it for breakfast, so I decant a snack sized portion of the base into a container, and then grate in an apple, and squeeze an orange into it. Mix it up, dollop of natural yogurt and a squirt of honey and it's good to go. If you want it for breakfast, you can make it up the night before, then just add the yogurt and honey in the morning. In fact, you should make it up the night before, as the juice is supposed to soak into the oats for a while.

I will admit that it probably doesn't look quite as lovely as it might once it's swilled about in his school bag for an hour or so, and he's already told me that his classmates look upon him in horror when he tucks in, so I'm just delighted that he's still willing to take this to school for a snack, and hasn't caved in to cheese-string based peer pressure. I dare say it's only a matter of time.

If you too have a fruit refusenik, give it a go.  Or else tell me what you do to up the vitamin C in your child's diet.