My mother sent us a parcel for Christmas, all wrapped up in a big cardboard from you-know-who (the tax-dodgers). Unfortunately, the surprise was ruined just a leetle bit by the fact that the words 'WAFFLE MAKER' were printed in giant letters on the side of the box. Cheers Santa. Well, we've kept it in a cupboard and at least managed to pretend to ourselves that it is going to be a surprise.

I am however, delighted with this gift. I love waffles. Mum used to have a whacking great old waffle iron which always produced really delicious waffles, and I'd asked her if she still had it (we haven't got to the answer to that yet) which must have given her the idea. She rarely used it, because it was so heavy that it almost broke your wrists hoiking it onto the stove, but the results were always splendid.

So, having known for some weeks what I was getting, I've been able to plan for a waffly Christmas Day breakfast. Is anyone else old enough to remember the days when part of the surprise was 'will it come with a plug or not'? That is an improvement (take note, battery-less toy Christmas destroyers). I think one of the keys to a successful Christmas day is to get the children to stop eating chocolate santas for long enough to eat a decent breakfast that will sustain them for long enough to prevent a mood crash before the main event hits the table. Usually this would be pancakes in our house, but obviously we had to try out the new toy, so waffles it is this year. With cream and maple syrup. No pics yet, because that would be cheating. I'll add some after the event.


Whatever you're having for breakfast tomorrow (and I'd love to know what that is), I hope you have a very merry Christmas and a peaceful and happy 2013. 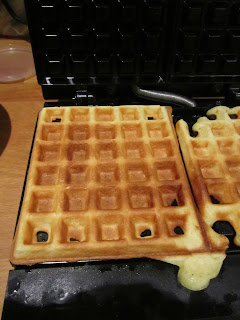