I've long been impressed by the English language's ability to swipe words from other languages and integrate them into our mother tongue. Not for us a hawkish Académie Française banning the use of Anglo-Saxon le weekend. Oh no, give us your tired clichés, your poor comparisons, your huddled mass nouns and we'll take 'em all and turn them into a linguistic stew of a language. Hurrah for that, I say. Vive la différence!

As I've been preparing for Christmas, I've been thinking about how we absorb Yuletide influences from other cultures too. This is nothing new of course - much of our Christian Christmas is nicked from the  pagans in the first place  - all that holly and ivy, mistletoe and wassailing certainly didn't come from deepest Judea - and the Germans have long been purveyors of the finest Christmas traditions to the Royal family of this country.

I've been deep into a book on Scandinavian Christmas cookery this year, and the supermarkets and shops are full of German stollen and pefferknusse, French marrons glacés and Swedish flat-pack gingerbread houses. I've seen little Japanese dolls used as tree decorations, and John Lewis is heaving with Scandi-style red and white ornaments. And of course while the Americans have taken our trees and made them 10 feet taller, our Father Christmas and turned him into Santa, and our string of fairy lights and turned them into entire towns swathed in flashing reindeer and snowmen, they have also given us back some of the finest Christmas traditions - cranberry sauce, It's a Wonderful Life, and...erm..pumpkin pie. Only kidding. They'll have to think of something that's stuffed full of raisins and spices if they want us to accept one of their sweet Yuletide offerings. See, we've happily embraced the calorie-fest that is a German stollen, and the lighter (relatively...), but still fruit-laden Italian panettone, but even they are still bringing up the rear behind a mince pie or a Christmas pud or a big wedge of Christmas cake. It seems that at this time of year, a Brit and his/her dried fruit-based confection cannot be parted.

So, for any American readers out there, here's an idea - a mincemeat muffin. Bear with me, Brits, these really are surprisingly delicious. They are like a mini, lighter version of a Christmas cake, all cinnamony and just reeking of Yule. And you don't have to make pastry, which is always a bonus.  And while I certainly wouldn't eat Christmas pudding for breakfast, I would certainly toy with one of these babies on Christmas morning. 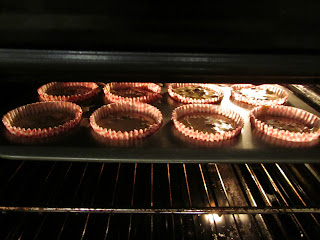 Now, the first thing I'm going to say to you is this: make your own mincemeat. I know that it looks like a thing that would be very time-consuming and faffy, but it really isn't, apart from a bit of apple peeling and chopping. It's the easiest thing in the world and tastes so much better than most shop-bought mincemeat. It'll keep for ages too, so make a few jars and you'll have some for next year too. There are a kerjillion recipes out there in the ether, and the great thing about mincemeat is that it is very adjustable to cater for different tastes, so find a basic recipe and have a fiddle - add cassis or cointreau instead of brandy, or no alcohol (if you must), use cranberries instead of some of the dried fruit, use more nuts, or fewer nuts, or no nuts at all. See? But essentially, it's a case of weighing out your fruit/nuts/suet/sugar/spices, adding citrus juice and soaking for a while, then cooking it all very slowly in a very low oven for a few hours, then mixing in some alcohol, whacking it all into some jars and presto! Christmas in a jar.

Look to Delia, my friends.

The muffins are as easy-peasy as ever. I've adapted this recipe from Muffins: fast and fantastic by Susan Reimer. 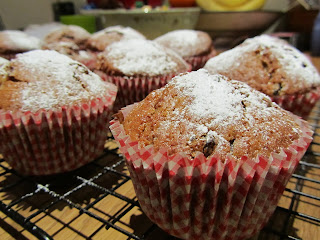 1. Mix the wet stuff. In a separate bowl, mix the dry stuff.

2. Add the wet stuff to the dry stuff, mixing in the sultanas with the last few strokes. Pop it all in to 12 muffin cases, and cook at 200C for about 20 mins until they are springy on top. 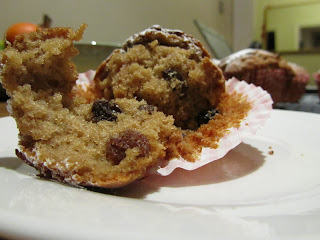