Today, I am dark, chunky and bitter


I'm talking marmalade of course.The arrival of Seville oranges is one of the highlights of my year. I know. It's one of the few really seasonal fruits left - you really can only get them for a few weeks at this time of year, and I find that rather thrilling. You can freeze them, though, so buy more than you need when they come into the shops, because their season is very fleeting. 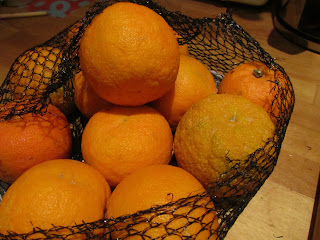 I adore marmalade. For me, the darker and chunkier the better, and making my own means I can make it as dark and chunky as I darn well please.

Marmalade of course originates right here in Bonnie Scotland; in Dundee to be precise, where the story goes that Mrs Keiller was obliged to think up something to do with a cargo of bitter oranges that her husband had bought from a Spanish ship that had taken shelter in Dundee harbour. Imagine the scene in the Keiller house. 'You've bought what???'. I thought MrB was bad enough with his random internet shopping purchases, but at least he's never come home with a ship full of oranges.

Our smallest breakfast boy also loves dark marmalade 'with golden chunks' (too much Paddington...), and last year the boys were big enough at 5 and 6 to help with the rather tedious business of prepping the fruit. You can imagine their delight at being allowed to handle large sharp knives. Under very close supervision it's actually a perfect way to introduce children to sharp knives - once the oranges have boiled, they're soft enough to cut very easily, so it's really quite a straightforward job for little people. If you like a fine shred in your marmalade, you may need to work on their technique a little - I think a mezzaluna might be a good solution. And, perhaps counter-intuitively, it's important to make sure that your knives are very sharp, as this will prevent them from slipping and potentially cutting small fingers. I firmly believe though that it's important not to completely eliminate all manner of risk from children - they need to know how to handle knives if they are ever to become competent cooks.

There are a million and one recipes for marmalade, and I have fiddled with many of them over the years to come up with my version. It is dark and treacly, and bitter, so definitely avoid it if you are more of a golden shred lover.

This is the recipe I've come up with after all the fiddling. The result will be very dark, so if you prefer a clearer, sweeter, more golden kind of marmalade, then this probably isn't for you. One of these days I'm going to experiment with some of the more exotic types of marmalade, as the possibilities are legion: grapefruit, lime, orange and lemon. The addition of ginger or whisky are also possibilities worth exploring. My Tokyo correspondent Elisabeth has recently told me about an Asian citrus called a Yuzu - I'd love to try that if I could get hold of some. But for now, here's my antidote to the January blues, and it's orange. Well, it's not actually, it's more of a deep dark brown.

The recipe is based on Pam Corbin's one in the River Cottage Preserves book, but I've tweaked it to make it darker. Her whole fruit method is really simple though.

Note: you can fiddle about with the types of sugar to make this less dark, or darker, but you need 2kg in total.

You'll also need:
jars - I sterilize mine by washing them on the hot cycle of the dishwasher, but don't open it until you're ready to use them. You can also put the jars in a moderate oven for 5 minutes instead if you don't have a dishwasher. This quantity makes about 6 or 7 jars.
a sugar thermometer is useful, but not essential
cold saucers (put 2 or 3 in the freezer before you start)

1. Put the water in a large sturdy pan - a maslin pan if you have one.

2. Give the oranges a scrub and take the 'button' off the tops. Put them, whole into the pan and bring to the boil, then simmer for 2 hours or until the skin is soft. I find that it's hard to turn them over when you start - they turn themselves back over, but as they get softer, you'll be able to turn them to make sure the other side gets cooked.
TIP: One year, I was pushed for time, so I did the boiling up of the oranges in my slow cooker to free up the time that I'd otherwise have to be around while the oranges are cooking on the hob. This worked fine, but just make sure you have the right quantity of liquid afterwards.

3. Take the oranges out of the pan and keep the water. Measure it - you need about 1.7l, so either make it up by adding fresh water if you don't have enough or reduce it by boiling if you have too much.

4. Cut the oranges in half and scoop out the pips into a bowl. Cut the peel into chunks of whatever size you prefer. Tip all of the peel and accompanying mush back into the pan. Put the pips and any attached stuff in a sieve and shoogle it about with a wooden spoon over the pan - the gloop that comes through it is rich in pectin, which is what makes the jam set, so get as much out as you can, then chuck the pips out.


5. Add the sugar, lemon juice and treacle to the pan and turn the heat back on. This is the point where I feel the terror, as I see how much sugar is in it, but hey ho. On we go. Cook it gently until the sugar has dissolved completely. Don't let it boil at this stage or you'll end up with crystals in your finished marmalade.

6. Once the sugar has dissolved completely (check on the back of a wooden spoon - if you can see grains, keep going), bring the mixture to the boil and boil hard for about 15 minutes or until the temperature reaches about 100C on your thermometer. Keep stirring so that the marmalade doesn't catch and burn on the bottom of the pan. Setting point is marked on mine (I think it's 204ish C), but I usually start testing it before this. Take one of your cold saucers and drop a little of the marmalade onto it. Leave it for a few moments and then push it gently with your finger, and if it wrinkles, you have a set. I sometimes find it takes much longer than 15 mins, but  don't despair if it seems to be taking forever, just bring it back to the boil and carry on, testing at 5 minute intervals until you get a set.
7. Once you have a set, take the pan off the heat and leave it for 10 minutes or so - this helps distribute your chunks evenly - then pour it into sterilised jars and seal.

And if you're going to all that trouble, you really need to make some nice fresh bread for your inaugural slice. 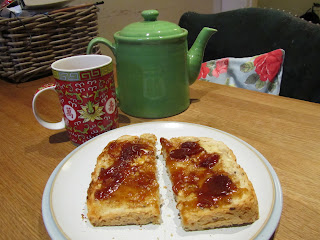 Bliss. On a plate.