We decided on a whim (or a sugar-crazed rush from the cinnamon buns possibly) to take ourselves over to The Whitmuir Organics cafe near West Linton for lunch and a trot in the hills at the weekend. It's based on an organic farm in the Borders, whose aim is to become a proper community farm for the local area. We had a few reasons for schlepping over there, but among them was my desire to see a community bakery in action. Bakery hours being what they are, much of the 'action' in the Breadshare Bakery was over by the time we stumbled in at lunchtime, but after a really good lunch in the cafe (creamy mushrooms on toast for MrB, falafel burger with potato salad for me, and two big mugs of soup for the breakfastboys), and a pootle round the farm shop, I was taken over to the bakery to meet the bakers.

I think I've mentioned before that one of the things I've noticed since starting this blog is what a lovely bunch of people bakers seem to be, and the people at Breadshare were no exception. We had a wee chat about bread and community baking, and they showed me their mixers and ovens, and sent me away with a very fine caraway rye bread, which I've been eating with cream cheese and pickled gherkins - mmmm. I also got a sneak preview of their new oatcakes. I won't tell you the secret ingredient, as I'm sure they'll be launching them with a splash in a couple of weeks, but if you're near Edinburgh, do drop in or go to one of the farmers' markets they visit for lovely bread or oatcakes with a twist soon. Their aims are very worthwhile and it would be great to see more businesses like this in local communities.

I do have some concerns over how community baking works in practice - is it just another source of luxury bread to middle-class people who have enough money to afford a £1.50 loaf and ignore the 50p loaf of sliced Chorleywood bread in the supermarket? To me, £1.50 doesn't seem like much, but I know that I'm lucky in that respect. How can these bakeries ensure that their stated aim of bringing real bread to people who need it (ie people who are, for economic reasons, bulking out their meals with cheap bread) is met? For years supermarkets have kept the cost of food artificially low, and we are now seeing the results of that in the form of horsemeat and goodness knows what else in processed food. However, acknowledging this fact is not at all the same as solving the problem, because of course if we all had to pay the 'real' cost of decent food, then the poor would merely be poorer, and more numerous. Is the only answer for people to grow their own/bake their own food? And how is that possible in a society where people are being 'encouraged' back to work in poorly-paid jobs, or indeed being forced to work for nothing in government schemes or internships? Looking after a productive garden, and baking bread takes time that many people simply don't have (assuming they actually have access to a garden in the first place). We seem to have created a dysfunctional society in which we are unable to feed ourselves properly at a reasonable cost, and the consequences of that are potentially disastrous. I don't have the answers to these questions, but they are worth pondering, I think.

On a brighter note, we had a walk through the farm afterwards, in the company of of the farm sheepdog, seeing the e.nor.mous brown pigs, the field of gorgeous hens scratching about like truly happy chappies, and the polytunnels full of good things. And the view from the top of the hill, out across the Pentlands, to Arthur's Seat in Edinburgh and right across the Firth of Forth to Fife was stupendous on a lovely spring day. 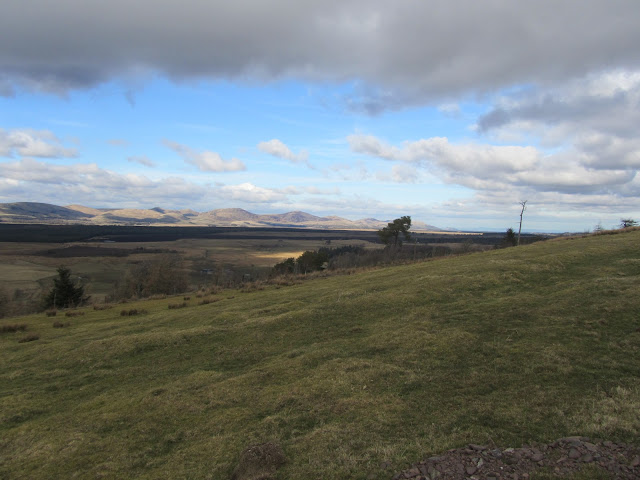