A bun in the oven

My new year's resolution to bake more bread has got a little out of hand. I've made four loaves this week - a wholemeal loaf, a raisin loaf, a spelt loaf and a beer barm loaf. Unfortunately, the problem with home baked bread is that it is so darned good that you just go and eat it all. And once you get the hang of fitting the timings into your day, and figure out how to time things so that you can bake something reallyverygood on a Friday night in order to eat something reallyverygood for breakfast on a Saturday, well, it's also very easy to find yourself sitting in a supermarket cafe with a cup of coffee and a fairly meh cinnamon bun, thinking 'You know what J Sainsbury? I could make a much nicer cinnamon bun than this'.

And so here I am on a Friday evening with a batch of dough proving in the bread machine, and a bowl of cinnamon bun filling in the kitchen and a pan of sugary glaze on the hob, and really things are not looking too good for my waistline tomorrow. They are, however, looking extremely promising for breakfast.

I've used Jane Mason's recipe from All you Knead is Bread. She's also given the recipe on the Virtuous bread website, but I do recommend the book. I've made a few things from it already, including the Russian Rye loaf that I blogged about a few weeks ago. I like this book a lot - it's very straightforward, and handily gives instructions in each recipe for instant yeast, and fresh yeast and whatever the other kind of yeast is called that comes in little balls, so that I can use fresh yeast if I'm feeling brave and instant yeast if I'm feeling lazy (today).

I won't regurgitate the recipe here - I've linked to it above, but it's dead easy, especially if you cheat like me and let the breadmaker rustle up the dough for you while you devote some quality time to your children. And yes, I do realise that really good quality time with my children would actually involve getting them to help me make the buns, but y'know, it's Friday, they were a bit tired and cranky, and I quite fancied a quiet evening pottering in the kitchen. So. A bit of rolling: 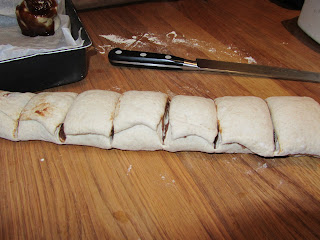 a bit of of dipping: 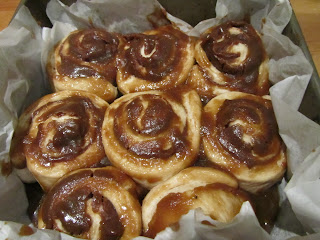 and a bit of proving and baking. And a whole heap of Mmmmmm. Though mine do seem to have rather more glaze on them than the picture in the book suggests, even though I didn't use more than about 2/3 of the glaze mixture. MrB couldn't wait until breakfast when he saw them, and went for the late-night snack option. He has deemed them 'really good', praise indeed from Mr Power Shake himself. 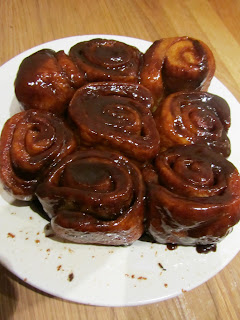 There is something about a swirly bun that's very appealing. Chelsea buns full of plump raisins and spices, cinnamon buns full of...well...cinnamon, and possibly later this week the rather tasty looking cheese twirly buns in Deb Perelman's Smitten Kitchen Cookbook. I love the way the buns snuggle together hunker-munker in the tin and puff up against each other. And the way that you can untwirl them to eat them. And obviously the fact that a bready thing filled with a fruity thing, or a spicy thing or a cheesy thing is almost always a fine thing.

You will gather from this post that the news that Ms Mason is currently writing a whole book about buns has been warmly welcomed in the breakfasthouse.
Posted by breakfastlady at 09:32