The great marmalade crash of 2013

So, my enthusiasm for marmalade has come to a sticky end.

I was out at a party last night and stumbled into bed at about 1am. A couple of hours later I was woken by an almighty crash. Since we've already had one ceiling collapse saga in this flat, I stumbled back out of bed to see what had happened, in case a ceiling had fallen in on, say, my children.

But no, turns out a shelf had fallen off the wall. In the middle of the night, for no apparent reason. That's quite bad. But when it's also the shelf upon which you have placed an entire season's Seville marmalade (and some of last year's too), and an entire season's pink grapefruit marmalade, and an entire season's apricot jam, and...well, you get the picture. The whole blimmin lot. It wouldn't have been quite so bad if the shelf had merely fallen to the floor. But no, it's in a cupboard full of stuff in our hall, so the cascading jars hit boxes of wires, and guitar cases, and files of papers, and old vinyl records and turntables from when we were young and hip, and pretty much anything else you can think of that one might put into a hall cupboard. It was like an episode of Paddington gone bad. At 3am. I quietly closed the door and went back to bed.

This morning was spent decanting the cupboard contents into the hall, scraping marmalade and broken glass off various items and rationalising our collection of plug-in heaters (a collection we amassed when our boiler packed up in the middle of a particularly cold winter a few years ago). I'm not sure they work so well full of congealed marmalade.

I'm happy to report that the cupboard is also carpeted, which is bad when it comes to cleaning marmalade off it, but good in that a cushioned landing meant I managed to salvage a few jars. But some of them look mighty dented and may have to go as well if the seals have been broken, I fear.

The survivors (note, some of these jars are empty): 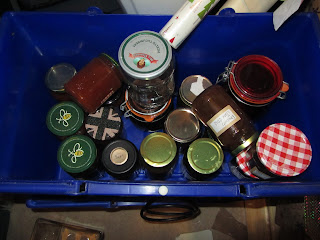 I feel sure there is a valuable life lesson here. Possibly:

1. Never make more marmalade than your family can reasonably consume in a year.

I actually had a big clear out of the cupboard a couple of weeks ago, and so what remained at the time of the Marmalade Disaster was actually the really good, important crap. It had survived the first cut. Though quite why a really manky old cushion inner for which I will never find a replacement cover because it's a sort of saggy pyramid shape had reached this stage in the competition, I cannot say. It is now in the bin. Along with two broken car sunblinds, a halogen heater and a mildewed guitar case. See what I mean? The sort of thing you just can't live without.

So, perhaps my rude awakening had a greater purpose. I feel lighter, and a step further on the path to domestic Enlightenment. Though in the dark, marmalade-drought days of December 2013, I may think otherwise.

Email ThisBlogThis!Share to TwitterShare to FacebookShare to Pinterest
Labels: marmalade