We spent most of Pancake Day on the motorway on our way home from the shenanigans surrounding the Festival of MrB. So I'm afraid I do not have any exciting breakfast pancake tales to share with you. We did manage to rustle up some this evening, but that would be cheating a bit wouldn't it, in a breakfast blog? For the record, I was going to use Jamie Oliver's 1-tweet recipe (1 cup s-r flour, 1 cup milk, 1 egg, pinch salt, whisk, fry), but it sounded as if it would make thick American pancakes, and the breakfastboys were adamant that it should be thin crepe-style pancakes for pancake day, and I agree really, so I went with Delia's tried and trusted standard pancake recipe from the Complete Cookery Course. It's a book I rarely open these days, but it's great when you want an absolutely standard recipe for anything at all.

On any other day, I'm happy to experiment with pancakes: buckwheat/oatmeal/spelt/thick/thin/you name it, I'll give it a go. But when it comes to Pancake Day, I'm a purist. A thin pancake with lemon juice and sugar for me. MrB and the smallest breakfastboy were right with me on that, and only oldest breakfastboy ploughed his own furrow with some cream and maple syrup - a nod to mardi gras, I like to think.

Well, it's been a right old weekend. We deposited the breakfastboys for the night with their lovely aunt and uncle, who showed them a high old time. In amongst trips to safari parks and waffle houses they stopped by Redbournbury Watermill, where they very kindly bought me some of the mill's own flour - a bag of white and bag of wholemeal and a wee bag of their sourdough starter, which I've just used to start a rye leaven. I'm not too sure what it is - it looks like wholemeal flour, and smells of yogurt, but I've followed the instructions to get it started and hopefully haven't left it too long with all the travelling and killed it off. 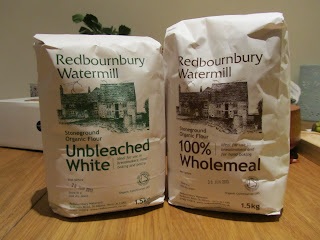 I am itching to get bread baking again after a few days away, especially now I have some special flour to use. I'll definitely have to pay the mill a visit myself too the next time we're down south, as they also have a bakery selling bread made with all their freshly milled flours, which comes highly recommended, and have a wider range of flours on sale too. Much of their grain is also grown locally, and I love the thought that everything is grown, milled and baked within a mile of the mill. It's just a shame that I have to travel 400-odd miles to get there!

Meanwhile, MrB and I went off to our own high jinks, which included a very fine breakfast at our hotel. It was one of those menus where you could really make an absolute pig of yourself - porridge, scrambled eggs with smoked salmon, French toast, you name it. MrB went for the full English while I plumped for waffles, which appeared in a very ta-da kinda way on a board, with a baked banana, sprinkled with icing sugar and with a little brass pot of maple syrup on the side. It was all very civilised indeed, and I felt extremely grateful for it after a looooooong night of fun the night before. Grateful also for the fact that it was served until 11am, so that I didn't even have to fall out of bed too early to appreciate it.

Back to business tomorrow, so I'll let you know what's happened to that Redbournbury Mill flour. In the meantime, if you want to try it, you can buy it online at the Bakery Bits website. This is a site I've only discovered recently, and I haven't bought anything from them yet, but it looks fabulous for everything to do with bread baking and fairly reasonably priced.
Posted by breakfastlady at 21:09