The oldest breakfastboy is 7 and has declared his intention to become an artisan baker when he grows up. He has picked out his delivery van (the most important feature of his bakery, natch) and spends hours poring over his recipe books. He is very fond of recipe books. So fond, in fact, that when I donated some of my old ones to a fair at his school, he promptly spent the money I'd given him on buying one of them back. It's a shame he doesn't extend the same enthusiasm to actually eating any of the recipes he is reading out to me. Not the ones with vegetables in them anyway.

He has recently taken to writing his own recipes. Unfortunately, he hasn't quite grasped the principle of recipe writing, so they consist of spur-of-the-moment quantities of whatever he thinks is likely to be in a cookie or whatever it is, which he then presents to me with a 'right, can we make them now?'. I'm reluctant to squash his creative urges, and I suppose that making them to his invented recipe might teach him to analyse what goes wrong and make them better next time, but I'm equally reluctant to waste 1kg of chocolate chips on what is clearly destined to not work, recipe-wise. Any advice gratefully received.

In line with my current bread fetish, I suggested this morning that we make a raisin and cinnamon loaf together. I really love a raisiny breakfast and I think we're now far enough from the surfeit of dried fruit that is December to contemplate a spicy, fruity loaf, perhaps toasted with a scraping of butter for breakfast. Yum. This one is Dan Lepard's recipe from Short and Sweet, which involves making a sponge of flour, water, yeast and raisins, leaving it for a few hours, then adding more flour, sugar, cinnamon and butter to create a dough. You then give it a few kneads and leave it to prove before baking. The recipe is given in his Guardian column here (look at the bottom of the article for the raisin-cinnamon variation of the main recipe). So, it's one of those most-of-a-day-long loaves, and I thought it would be good for teaching him a little about patience in baking and about how yeast works in dough, seeing as how he wants to be a baker and all. So, we set to with great enthusiasm making our sponge, which bubbled up nicely and we were all ready for the second stage. But I turned around to find him pulling on his wellies and heading off out with his brother and MrB, leaving yours truly with the rest of the loaf to make.  I suppose he's showing excellent promise as a manager of staff and delegator of tasks, also amply demonstrated in the 'tidying up the toys' department *clutches straws*. Still, there are worse ways to spend a Sunday afternoon than in the company of GQT and a big lump of raisiny dough.

Here's the loaf. It's a bit...erm...brown on the crust maybe, but it tastes delicious - we have all tested it and approved, ready for breakfast tomorrow. Can you smell the cinnamon? Mmmmmmmmmmm. 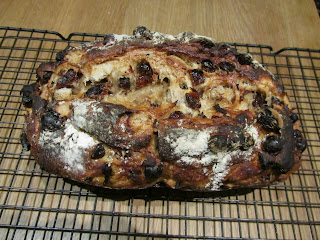 Meanwhile, in other news, I came into the kitchen this morning to find that my sourdough starter had escaped from its (closed!) kilner jar and was glooping down onto the counter. It's a lively little fellow for sure. Isn't it amazing that a mixture of flour and water can do that after a few days? Wow. no wonder people become addicted to making bread. I am reliably informed that some bakers name their sourdough cultures, in the manner of family pets, but I haven't thought of a suitable name for mine yet. I'll wait and see if my first sourdough loaf later this week gives me any inspiration. 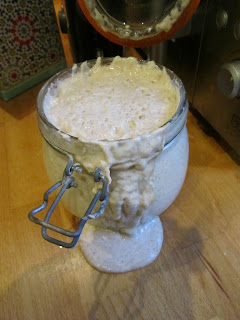