OK, so it's not quite Superstorm Sandy, but I have an embarrassment of rhubarb. My lovely neighbour arrived at my door with carrier bags full of rhubarb from her mother's garden a couple of months ago. I'm not sure if her mother lives on a rhubarb farm, but there were pounds and pounds of it. I made some jam, and a couple of crumbles, which didn't make much of a dent in it, so I froze the rest and have since been pondering what to do with it. I'd decided on some orange and rhubarb jelly (by 'jelly', I mean jam without lumpy bits in) so yesterday I got out the jelly bag and cooked up the rhubarb and squeezed orange juice, but after hours of straining there wasn't enough juice to make the jelly, so I was left with a small bowlful of rather pretty orange goop. What to do? 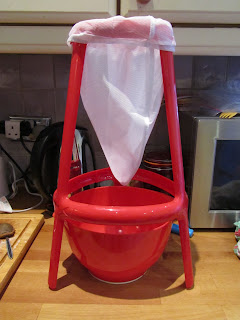 Well, if there is a thing I like more than jam on nice white bread, it's lemon curd. I know you can make orange curd, so how about rhubarb and orange curd? The best curds are made with the sharpest fruits - the more powerful citrus fruits in particular. Well, it was worth a try. I didn't have a recipe,  but I found one for gooseberry curd in Marguerite Patten's Jams, Preserves and Chutneys, and used that as a basis for this. In my own personal in-my-head fruit classification system, rhubarb and gooseberries are quite closely related (and yes, greengrocery pedants, I know rhubarb is a vegetable, but of course it's actually a fruit in my head). They share a tartness and need quite a lot of sugar to make them palatable. *Nostalgia alert*. When I was a child, we used to eat sticks of raw rhubarb, which we would dunk in a bowl of sugar before each bite. Yeurch.

So, here we have it, my on-the-fly rhubarb and orange curd. This quantity made 3 jars. You might find that your rhubarb gives a bit more juice and makes a bit more curd. My rhubarb was cut very late in the season and had also been frozen, so I think it was probably a bit drier than it would have been with younger, fresher fruit. See notes on quantities below:

Notes: You need about 300ml juice in total. Make up the difference with more squeezed orange juice or a bit more lemon juice if necessary. If you have more, the quantities should be 450g sugar, 3 large eggs  and  115g butter to every 600ml juice.

I have a bottle of ginger extract in the cupbaord and I was tempted to add a little to see what happened, but decided against it in the end. As I still have pounds of rhubarb, I might try it next time. I'll let you know if it works.

1. Put the rhubarb, orange zest and juice and lemon juice in a pan and simmer gently until you have a thick puree. Try not to cook it for too long, so as not to evaporate too much juice. You could use a pan lid to keep in the moisture and just give it an occasional stir.

2. Rub the resulting puree through a nylon sieve, and discard any remaining pulp. I had already put mine through a jelly bag at this stage, but there is no need to do this.

3. Put the puree into a heatproof bowl, along with the butter and sugar and place the bowl over a pan of hot water. Gently simmer until the butter melts and the sugar has dissolved. 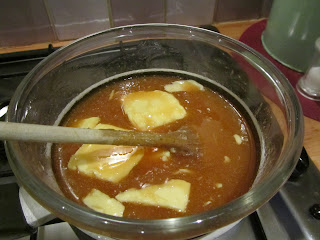 4. Beat the eggs and then add (make sure the mixture isn't too hot at this stage - you don't want the eggs to cook as soon as they hit the mixture or you'll end up with eggy lumps). Mix thoroughly and then cook gently until the mixture thickens enough to coat the back of a spoon.

5. Pour into sterilized jars, seal. Or eat. Because of the eggs, it won't keep as long as jam. But that's not going to be a problem in this house... 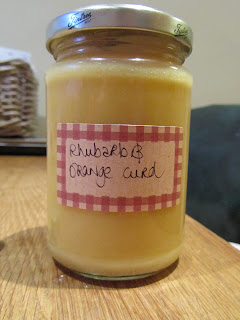 Boy, it's good. The tang of the fruits with the rich creaminess of the butter and eggs. Scrummy. Lovely on toast or soft white bread. But the great thing about curd is that it can be used in all sorts of other things:

Alternatively, just get a spoon.
Posted by breakfastlady at 13:02