A pudding and a prize

Miraculously, there was a bit of the fig and orange challah left over by Sunday, so I decided to go ahead with that bread and butter pudding I mentioned. And ohmygoodness it was well worth it. I realise that this is not really the place for a pudding recipe, what with it being a breakfast blog and all, but it works so well with the sweet white challah, and I'm all in favour of using up leftover stale bread, so don't want to waste the  opportunity.

I based this on Hugh-Fearnley Whitingtall's recipe in the River Cottage Bread book, but with a few tweaks of my own, not least the challah itself, which replaces the plain white bread in the original recipe. If you aren't up for making a whole loaf of bread just in order to make a pudding, I'd also add that I often make this with day-old hot cross buns, which are obviously, well, one a penny, two a penny, at this time a year (if only...). If you don't have enough leftover bread you can make up the difference with a different loaf (there are actually a few stray bits in this one from a wholemeal loaf, although I wouldn't recommend making the whole pudding with wholemeal bread - with 6 egg yolks and all that cream there's really no way that this could be described as healthy eating)

About 500g-600g day-old challah (see here for the recipe)
300ml double cream
300ml milk
1 vanilla pod
zest of one orange
a handful of raisins
jam for spreading (any flavour - I used blackcurrant, but apricot would be nice, or maybe even marmalade)
6 medium egg yolks (freeze the whites and use them for meringues of something later)
150g caster sugar
demerara sugar to sprinkle

1. Butter a shallowish casserole. Slice the bread and cut it into triangles or (if the bread isn't square) into squares. No need to be too anxious about the size etc. Butter each slice and then spread a very thin smear of jam on each and arrange in the casserole with one slice in front of another, a bit like in a toast rack, only leaning on each other. Don't go mad with the jam - the custard is already quite sweet. Poke any last wee bits of bread in where you have space. Put the raisins in between the slices as you go, trying to make sure that they don't remain too close to the surface where they are likely to burn during cooking. 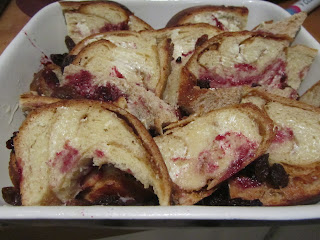 3. In a large bowl or jug whisk the caster sugar and egg yolks together briefly. Then pour the hot milk mixture into this, whisking all the time. Pour this custard over the bread, making sure that it soaks each piece. You should have a few bread peaks sticking up through the custard sea. Tuck in any stray raisins that are above the surface. Leave the whole thing to soak up the custard for 20 mins or so. Boil a kettle.

4. Sprinkle the demerara sugar over the top of the pudding. Put the casserole into a large roasting tin and carefully pour in some boiling water until it comes about half way up the side of the casserole. It's easiest to pour the water in once the tin is in the oven!

6. Serve warm. But it's also very good cold the next day. Leftovers of the leftovers. 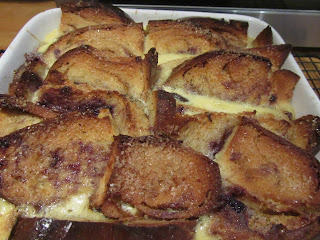 7. Start diet the next day.

In other news, I found out today that the two jars of marmalade I entered in the World's Original Marmalade Awards have both won awards! The pink grapefruit got a bronze and my orange marmalade got a silver award in the 'dark and chunky' category. I'm chuffed to bits, especially with the silver, which got 19/20. Tis was the first time I'd entered. Needless to say, I'm already thinking about how I can go one better in 2014! 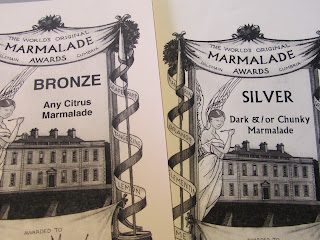