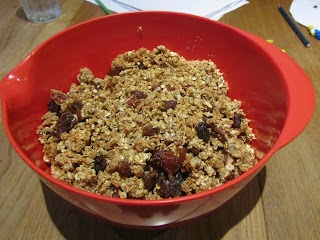 My kids love granola. But, being kids, and siblings, they don't ever love the same granola. Oldest breakfastboy likes his with raisins; youngest breakfastboy, who loves raisins, has nevertheless decided that he doesn't like his with raisins, but with what he calls 'super berries', in other words freeze-dried red fruit - raspberries, redcurrants etc.  The supermarket shelves are positively heaving with variants on the granola theme - with fruit, with seeds, with red fruit, with tropical fruit, you name it, so it seems that the great British public is in love with those oaty clusters. I'm actually unconvinced of the real health benefits of most of it - it always seems very sweet to me, but I figure that the oats and the fruit and so on are at least healthier than a bowl of Frosties.

I sometimes make my own granola - it's actually dead easy to make an oaty granola base, and you can then add whatever fruit you fancy to satisfy the whims of your own contrary family. For years I've been using Nigella Lawson's 'Fairfield Granola' recipe from Feast, but if you look at the recipe you can see that there is syrup and sugar and honey in it, and I must say that I've always used ready-made apple sauce too, rather than making my own, which means more sugar. So, I was delighted to see Deb Perelman's granola recipe in The Smitten Kitchen Cookbook. She uses way less sugary stuff in hers, and indeed, when you make it, you don't really notice the difference. Now, dried cherries and walnuts are not our favourites, and so I decided to fiddle about a bit with the original. That's the joy of granola - as long as you keep the wet:dry:fruit ratio more or less the same, and stick with more or less the same quantity of oats, you can use whatever you have to use up, or whatever you like to eat in yours to make it. So, here's what I used:

Method:
1. Mix all the dry stuff together in a bowl.
2. Mix in the wet stuff.
3. Beat the egg white with a fork until frothy and mix in. Spread it on a parchment-lined baking tray.
4. Cook in a medium oven (150C) for about 45 minutes to an hour, turning the mixture halfway through.
5. Cool completely in the tray, then mix in the dried fruit and store in an airtight container.

The breakfastboys are in rare accord on this one - 'VERY good'. Praise indeed.

Incidentally, did you kow that you get more health benefits from milled linseed/flax seed than by just sprinkling it in whole? I didn't, until Jane Mason told me on my bread-baking course at the weekend. The tough outer shell means that if you don't use milled, it just passes right on through without releasing all the goodies such as omega-3 into your body. I did notice hulled linseed in Whole Foods Market this morning (imagine that for a job. I sincerely hope they have invented a machine for it) so if you like it a bit more seedy, that might be an option.