A bowlful of words 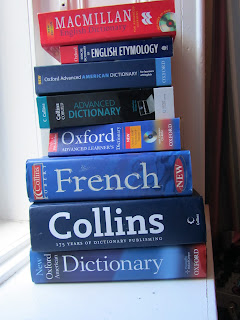 You can see from the photo above what I do for my day job. I get paid for being a language nerd. No no, I see your eyes glazing over, but bear with me. In an idle moment yesterday, I started flicking through one of my dictionaries in search of some little breakfasty linguistic nuggets to share with you.Yes, I am that sad. I read dictionaries for fun.

1. Muesli: comes from the German word mus, meaning mush or puree, and the diminutive li. So, in other words it means 'little mush'. I can see why they stuck with the German. I'm not sure that 'Little Mush' would have taken off here in quite the same way. 5 points to the Alpen marketing department. 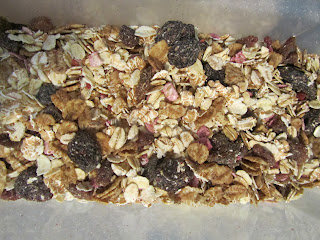 2. Treacle. In Britain, we now think of treacle as something similar to molasses, a black by-product of the sugar-making process, or as something similar to golden syrup (as in a 'treacle tart'), but there is a much older meaning of this word, which comes from the Greek word therion meaning 'wild beast'. It was once used to describe any liquid that was used by a herbalist or apothecary as an antidote to poisoning, especially venomous bites. Originally, these potions used honey as their base. And in that wonderfully convoluted way that English has, the origins of the word molasses, treacle's first cousin, lie in the Latin word mel, meaning, you guessed it, honey! 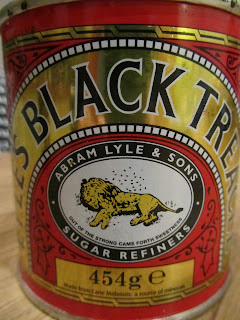 Strangely, modern treacle seems to have held on to these medicinal roots - or perhaps it's just me. I seem to remember being encouraged to eat treacle when I was pregnant because it's full of iron. Spike Milligan claimed that his uncle treated himself for some malady (was it baldness? I forget) by 'sitting naked in a darkened room, with a mixture of cow dung, saffron and treacle spread on his head'. I don't remember whether he was cured of whatever it was that ailed him.

The truly nerdy among you may be interested to note that the 12th century St Margaret's Church at Binsey in Oxfordshire has a 'treacle well' in its grounds, which was believed in the past to have healing powers, and is mentioned in Lewis Carroll's Alice in Wonderland. It is not, I understand, a well full of treacle (sadly), but a well full of healing waters.

'Treacle', as Eastenders fans will remember from the days of Pete Beale and Dirty Den, is also used in Cockney rhyming slang to mean 'sweetheart', ('treacle tart').

3. Did you know that the words toast and thirst are related to each other? The Latin verb torrere, from which both words derive, means 'to dry with heat' so if you're thirsty, you've been dried with heat, like a piece of toast. And incidentally, the word torrid, which you might perhaps use as you choke on 50 Shades of Grey over your cornflakes, has the same root. Scorching!

4. In France, you can cast spells, play the drums, and eat Chinese food with baguettes, as well as eating one for breakfast. A baguette is familiar to us Brits as a long French loaf, but the word in French simply means 'stick', and pops up in all sorts of non-bready places.

5. Finally, let's hop back to Germany, to a word whose origins are a little more dubious, the word pumpernickel, that dark, dense rye bread that is so good with cheese and gherkin pickles. My large Collins dictionary glosses over this one with a swift 'of uncertain origin'. My Oxford Dictionary offers 'lout, bumpkin, of uncertain origin'. But Merriam-Webster offers us the much finer 'German, from pumpern to break wind + Nickel goblin; from its reputed indigestibility'. In other words, it's so indigestible that it'll make you fart like a devil ('Old Nick').