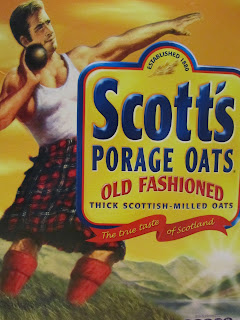 Today, in case you've missed it, which is entirely possible, is St Andrew's Day, so in celebration of the occasion, I'm doing a Scottish breakfast. I could of course have gone in several directions here. Scotland is arguably the spiritual home of breakfast - Dundee marmalade, Arbroath smokies, Loch Fyne kippers, oatmeal porridge, heather honey, Stornoway black pudding, you name it, and breakfast-wise, the Scots are probably right on it. But today it's freezing outside so there's really only one place to go, and that is porridgeville.

I was reading a funny post by Claire over at the Crumbs blog the other week about how she feels she's a middle-class pariah because she doesn't like porridge. And it's certainly true that the humble oat has made a big comeback in recent years. You can hardly move in the cereal aisle now for variations on the oat-based cereal - rolled oats, oatmeal, oat bran, oats in clusters, oats in flakes, oats in bix (the less said about Oatibix the better- whoever invented that needs a good talking to. Bleuch.), porridge in individual pots with honey/blueberries/raspberries/apples/cinnamon/you name it. And let's  not forget my own childhood favourite Ready-Brek - 'Central Heating For Kids' - which now looks to me uncannily like dandruff. And that's before we even get started on the muesli shelves. But on a cold winter's day, it really has to be back to basics - a steaming bowl of porridge. My grandfather was brought up in the early years of the last century in a West Highland crofting family, and I was regaled from an early age with tales of him being sent off to school (no doubt barefoot...) across the hills with a slice of porridge in his pocket to last him a few days. I have no idea if any of it was true, but what is true is that porridge was, and still is for many, a staple of the Scottish diet.

The basic recipe, as any true Scot will tell you, involves oatmeal rather than rolled 'porridge' oats, salt and water and a bowl of cream on the side. F Marion McNeill, in the wonderful old Scottish book The Book of Breakfasts, tells us that 'a Scot nearly always declines porridge outside of Scotland' whilst also admitting that even here in Scotland, porridge is often not what it was. She blames modern milling and storage methods, and tells us that when she was a child (she was born in Orkney in 1885) the meal was poured into a meal chest and the children were stood on the top and told to tramp it down until it was tightly packed for storage.

She gives this recipe:

Allow for each person a breakfastcupful [a wha'?] of water, a handful of oatmeal, and a small saltspoonful of salt. Use fresh spring water, and preferably, home milled-meal, coarsely ground. Bring the water to the boil, and just as it approaches boiling point, add the oatmeal, letting it fall in a steady rain from the left hand whilst you stir it briskly with a spurtle (porridge-stick) or wooden spoon. When the porridge is boiling steadily, draw the pot to the side and put on the lid. Let it cook for 20-30 minutes, according to the quality of the oatmeal. Let it cook for at least ten minutes before you add the salt, which has a tendency to harden the meal and prevent its swelling if added at once. On the other hand, never cook porridge without salt. Ladle straight into cold porringers or soup-plates, and serve with a small individual bowl of rich milk or thin cream. Each spoonful of porridge should be dipped and cooled in the milk or cream before being conveyed to the mouth.

Note: Children often like a layer of sugar, honey, syrup or treacle, or of raw oatmeal. A morsel of butter in the centre of the plate agrees with some digestions better than milk.
Porter, skeachan, and brisk small beer used to be popular accompaniments to porridge.
Porridge may be made with milk or whey instead of water, and with barley meal or wheaten meal instead of oatmeal."

Translation for sassenachs:
Porringer (this one's quite posh)
Skeachan
A spurtle

Now, I think we can make several assumptions here. First up, I'm assuming that most of you don't have the wherewithal to grind your own oatmeal. Or indeed the inclination. I'm also going to hazard a guess that you don't drink porter with your breakfast. I suspect that it is also a bit more difficult to get hold of decent oatmeal in England than it is here, where every supermarket sells oatmeal in different grades.You're looking for coarse or pinhead oatmeal to do it in the traditional way, and you should be able to get it in a health food store if your local supermarket is not forthcoming. Mr Breakfast, regular readers may remember, maintains that steel-cut oats are the absolute best, but they aren't easy to come by in the shops, and if you're going to be as obsessive as him you may need to go online to get them.

Secondly, I think most people are a little less puritanical in their breakfast habits these days. I actually prefer my porridge made with water too, but I think I'm probably a bit of an oddity in this respect and that most people probably use milk, or a mixture of milk and water to make their porridge.

And finally, most people are more than happy to add all sorts of wonderful things to their porridge to make it a little more interesting. When I mentioned to a few people that I was writing this post, I was given some lovely ideas for fancying up your porridge. Here are a few of them:

Alison at Alison's Garden loves porridge for breakfast. As you'll see from her blog, she's outdoors in all weathers, so she starts the day with 'organic jumbo oats with added oat bran, cooked with water, finished with a liberal sprinkling of cinnamon & fresh fruit'. Yum.

Bikelights in the Fruit Bowl has posted her 'super-magic porridge' recipe. I've never heard of adding ground almonds to porridge, but what a great idea - it sounds delicious. I'm sure Ms McNeill would throw up her hands in horror at the thought, but hey. That's progress. Constant process improvement, as they say in the big bad world of business.

For porridge cheats, one of my friends highly recommends Dorset Cereals Proper Gingerbread Porridge. And she's a proper highlander, so I figure she should know her oats from her onions. It has pieces of gingerbread and dates in it and it does sound good - ginger is always great for warming you up on a cold morning and the combination of dates and ginger sounds like a winner to me. Being a cheapskate, I'm wondering how this could be done in a homemade way, without having to actually, you know, make  gingerbread. Ginger essence? Ground ginger? Hmm. I feel an experiment coming on.

Another Scot, Rachael at Tales from the Village, tells me that she likes hers made with milk and brown sugar, which is exactly how my Scottish mum used to make mine when I was little. I loved the way the brown sugar went all fudgy and would eat my way carefully around the brown blob in the middle so that I could save that bit for last.

Nowadays, we usually have ours fairly simply. Firstborn likes a banana thinly sliced into his as it's cooking, so that it melts away into the porridge and just leaves it all 'bananary'. He then likes a wee swirl of maple syrup on top (and cream if  he can get away with it). As an alternative, he'll accept a handful of raisins thrown in as the porridge is cooking.

So, how do you eat yours? However you like it, Ith gu leòir, and Happy St Andrews Day!