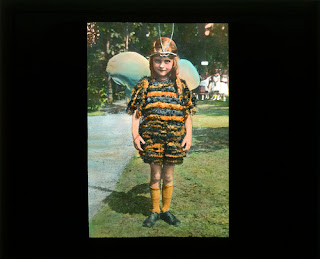 "Oh what a glorious thing to be,
A healthy grown up busy busy bee,
To be a good bee
One must contrive,
For bees in a beehive
Must behive.
But maybe I wouldn't be a bee,
Bees are all right when alive, you see,
But when bees die
You really should see 'em,
Pinned on a card
In a dirty museum."

You may remember that a while ago I posted about honeybees in France producing luridly coloured honey. Since then, I've been reading A World Without Bees by Alison Benjamin and Brian McCallum, about the decline of honeybees and the threat that this poses, not only to honey production, but also to the pollination of crops around the world. According to the British Beekeepers' Association, one in three of the mouthfuls of food we eat is dependent on pollination, so when you're eating your breakfast, even if there's no honey involved, honeybees almost certainly are.

This year, of course has been even more devastating because of the monumentally lousy summer we had here in the UK. Don't laugh, non-UK readers, this one was really bad, even by British standards. Overall honey production at the end of September was over 70% down on last year, from about 30lbs per hive to only 8lbs. Not only this, but the poor weather is likely to have a longer term impact. Queens mate on the wing on fine summer days (doesn't that sound lovely?), so the poor weather is likely to affect bee numbers next year.

So, what can be done to help save the honeybee? There's not much we can do about the Great British Summer, more's the pity, but there is a need for wider research into the more general decline in honeybee numbers, which have been badly affected by colony collapse disorder and varroa mite, not just here in the UK but in Europe and the US as well. To help fund this, the BBA is offering an Adopt a Beehive gift pack in their online shop. All the proceeds go towards honeybee research and education. For £30 you get to pick a hive and also get:

*A mix of wildflower seeds specially selected from HabitatAid, so that you can create your own bee-friendly patch
* Pocket guide to the honey bee
* Burt’s Bees lip balm
* 20% off Burt’s Bees voucher
* Set of  beautiful bee cards
* Hive Talk – 3 Seasonal newsletters with updates from the Hive
* Plus your choice of either a  jar of British honey or a  jar of honey mustard

Now, in principle, I am not generally in favour of buying charity donations as gifts. I believe that charity is a personal matter, and buying someone a charity goat seems to me to be more about the giver than the receiver - a bit holier-than-thou. 'You have enough, so I'm going to donate to charity on your behalf. THINK ON, small child'. I don't like that. So, I'm not going to suggest that you all adopt a beehive for your loved ones. Unless they are fanatical bee fans, in which case, go right ahead. However, with Christmas coming, I've just had a L'Oreal moment and adopted myself a hive as an early Christmas present. If you have the means, and are interested in the plight of the honeybee, would you consider making a donation as well?
Posted by breakfastlady at 11:16