I've been inspired by the Kitchn blog's '5 ways to eat chocolate for breakfast' post. Delicious as they all sound (apart from Nutella, I can live without Nutella quite happily), it seems to me that they've forgotten the absolute best way to eat chocolate at breakfast, the pain au chocolat.

Now, obviously, making them yourself is a faff, there's no 2 ways about it. But I've made croisssant dough in my bread machine before with great success, and pain au chocolat is essentially croissant dough with added chocolate, so that does take some of the palaver away. Admittedly, you still have the malarkey with the butter and the folding and the chilling, but if you have an evening with nothing much to do then you can make the pastries, chill them overnight, then bring to room temperature and bake in the morning. I promise you that despite the time involved they are quite easy, and think of the payoff: warm pastries, big mug of coffee/tea, weekend papers? Bliss.

The main secret is to keep chilled.Your ingredients need to keep cool so that the butter doesn't melt too readily, or they'll end up a bit more bready, and less flaky and delicious.

You can freeze the pains once they are made, before cooking, for up to 6 months. Take them out the night before you need them, lay out on a baking tray covered with a plastic bag overnight, then glaze and bake in the morning. So, you don't have to eat them allinonego. Though obviously, that possibility remains open to you.

when rolling the dough:
150g butter

Notes: Most croissant recipes don't use an egg in the dough. I haven't tried it without, but it's certainly possible to make them without an egg.
You can make these without a bread machine, but a freestanding mixer would be good as the dough needs to be good and silky before you roll it out.

1. Make the croissant dough as per bread machine instructions, following the usual order of ingredients for your machine.

2. Roll out the dough into a rectangle, approx 20x25cms

3. Divide the butter into three portions. Dot one portion over the top 2/3 of the dough. Fold the bottom third up over it and then fold the top 1/3 down over the top. Turm the dough a quarter turn. Many recipes use more butter than this and roll out the whole quantity of butter between sheets of cling film. The sight of a large slabby sheet of butter like that is too much for me. I think I'd just go and buy them instead so that I could ignore the butter content. 4. Roll out again into an oblong , dot the 2nd portion of butter over the top 2/3 as before and fold again as before. Make another 1/4 turn and repeat with the last portion of butter. Cover the dough and put it in the fridge for at least 30 minutes to rest. 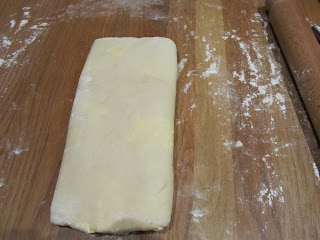 5. Repeat the rolling and folding three more times, then rest dough for 30 minutes.

6. Roll out the dough into a large rectangle and divide into 4 smaller rectangles. Cut each rectangle into two long triangles. Place a couple of squares of chocolate along the wide end of the triangle then roll up the dough loosely. Place on a greased baking tray with the pointed end of the triangle on the underneath. Cover and allow to prove until doubled in size. Brush with beaten egg. 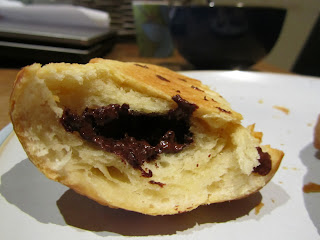 Do you have a favourite way of eating choclate at breakfast? I'm thinking of a couple more ideas that I'll share one my ideas are fully formed, but in the meantime, if you have any ideas, I'd love to hear them.