So, we're British. We may do Halloween US-style, but we draw the line at Thanksgiving. I'll have no marshmallow-topped sweet potato in this house, thankyouverymuch. But in a spirit of transatlantic bonhomie, I wanted to make something for breakfast with an American flavour. I've plumped for flapjacks, with cranberries and blueberries. Now, I believe that when I say 'flapjack', an American will actually think of something quite different from what I have in mind - some sort of pancake? I'm not sure, but anyway, this is the British take on a flapjack, with the addition of the berries that I most closely associate with the US.

Now, I say these are breakfast flapjacks. To be honest though, I'd really only eat them for a breakfast on the hoof, on those desperate-for-carbs-but-no-time-to-eat days. Or possibly if today were a national holiday of some sort... I tried for years without success to make flapjacks that resembled the chewy, sticky ones my mum used to make. I've finally got there, but I'm afraid the results do not make happy reading for any dentists out there. The sugar and syrup are not exactly tooth-friendly, and there is a lot of butter in them too. But they are rather good, if I say so myself. I can convince myself that anything involving oats is health food, and blueberries are a superfood, so they are practically oozing with goodness when you think about it. 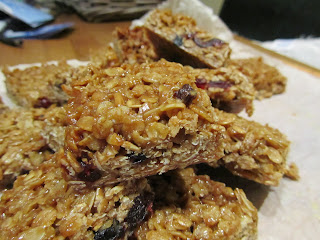 Notes: If you don't have light muscovado, a soft brown sugar would also work, but will make a slightly lighter flapjack.
Try to use good quality rolled oats - I find that some of the cheaper 'porridge oats' tend to be a bit dusty.
The dried blueberries and cranberries can usually be found with the raisins, sultanas etc in the supermarket. The ones I used are labelled 'dried and sweetened'. I haven't tried it with unsweetened berries, or fresh berries. I'd imagine that unwseetened blueberries might be OK, but cranberries are very tart. Although with all that sugar and syrup, that may not be such a bad thing. You could use all blueberries or all cranberries if you prefer, or another dried fruit such as raisins.
The lemon rind can be ommitted, but it helps to cut through the sweetness a little.

Method:
1. Preheat oven to 150C (140C for fan ovens). Line a square baking tin (about 25cm square, but slightly bigger or smaller is fine) with baking parchment
2. Melt the butter, then brush a little of this on the baking paper before adding the syrup and sugar to the butter in the pan and warming until the sugar dissolves.
3. Remove from the heat and stir in the rest of the ingredients.
4. Put the mixture in the tin and squash down a little to level the surface.
5. Bake for about 35-40 minutes until golden brown. The mixture will still be a bit sticky and bubbly-looking, but this will set once it's out of the oven.
6. Leave in the tin for 15 minutes or so, then remove and cut into squares.

Even if we don't celebrate Thanksgiving, it's always good to have an opportunity to stop and think about the good things that have happened this year, especially when 2012 has been a bit of a doozy for bad news in this family. So, along with the usual family/friends/good health etc, today I'm giving thanks for the following two things that have improved my life, particularly the kitchen-based parts of it, over the last year:

Easy-cut cling film. I cannot tell you how infuriated it makes me to lose the end of the cling film at 7.30am when I'm trying to get the packed lunches done. That awful sinking feeling when it peels off half a width and you just know you're in for a half hour of trying to find the end and the bit where the tear ends. But no more! 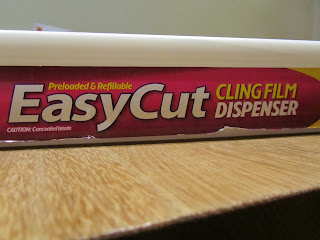 The person who invented this needs a knighthood, or a Nobel Peace Prize (well, if 'Europe' can win one, then why not easy-cut cling film wo/man?). It's a blimmin marvel.

My laundry pulley. The downside of living in the west of Scotland is that the weather is, quite frankly, dreadful. It rains a lot. My mum, who grew up in Aberdeen, and so really should know better, is always telling me that it's not that much worse than it is in south-east England where she now lives. Yeah, right mum. The climate means that outdoor drying is one of those things you do once in a blue moon, and then spend the rest of the day nervously twitching the curtains. I have a drier but y'know, not very green and all that, and also expensive to run.

The upside of living in the west of Scotland, however, is that you are quite likely to live in a house with great high ceilings, just begging for a laundry pulley. We had one in our old flat and I really missed it when we moved here about 5 years ago, so I'd been thinking about getting a new one ever since and finally got round to it this year. And hurrah. A load of washing on, up and out of the way, and dried in a few hours. The drier is hardly ever on and I am ridiculously, almost Stepford-wifely, pleased with it.

A note of caution, however. The rope on ours broke, and so I pootled over to Amazon in search of a replacement. The things that 'customers who were looking at this rope also looked at' would make you blush. Artificial dog poo and how-to books on Japanese bondage featured heavily, though I am not sure if it was the same customers looking at both. *mind boggles*

Happy holidays y'all!
Posted by breakfastlady at 10:29