You may remember that one of my publicly stated new year's resolutions was to bake more bread. Well, I've been seeing a lot of recipes lately for barm bread; that is, bread made using beer, and I thought I'd have a go at one. There's a long historical connection between brewing and baking, as breweries were the traditional source of leaven for bakers. So the marriage of beer and bread has something very 'right' about it in my mind - ploughman's lunches, good Welsh rarebit with ale in the cheesy topping, you get the picture.

MrB and I, pre-kids, once had a blissful October week of wall-to-wall sunshine on Harris, where we bought fish straight off the boat in Leverburgh, visited Harris tweed sheds at Luskentyre, climbed Clisham and swam in the blue blue sea. MrB paid in part for the rent of the beautiful old blackhouse we were staying in by doing some dry stone walling for the owner (MrB was a dyker in a previous life), and we sat in a field, the three of us, eating cheese and fresh bread and oatcakes, washed down with bottles of Red Cuillin ale from Skye, looking out across the Atlantic. Life seemed pretty perfect.

Enough nostalgia. I  used a recipe from Blackbird Bread's blog - they're a micro-bakery in Twickenham, and bake all their bread from home. Local bread for local people - great stuff. Their blog is definitely worth a look if you're interested in things bread and dough related.

I must confess that I usually resort to the breadmaker, but as I work from home, I thought I could punctuate the day quite easily with a bit of kneading and knocking back. And it was very therapeutic. I'm just finishing off a very fiddly job in my real life book world, so it was good to be able to get away from the  screen from time to time and bash the dough about a bit in between bursts of work. The only thing that I changed in the ingredients was that I used a golden ale (Cambridgeshire Golden Ale from M&S), rather than the dark ale specified in the recipe, because that's what I had in the house. I also left the first rise rather longer than the 45 mins specified in the recipe because I had to fit in the timings with the school run. I was a bit alarmed that my poolish didn't look anything like theirs - my scales seem to be a bit temperamental at the moment, and I suspect there was a bit too much flour in mine, because it bore a strong resemblance to wallpaper paste, but anyway. As you can see from the picture, it all worked out just fine in the end.

Oh. My. Goodness, I cannot tell you how thrilled I am with this loaf. It came out of the oven looking so splendid, and I thought the taste couldn't possibly match up to how good it looked. But it did! As the liquid is entirely beer, it has a lovely hoppy tang, and it was soft and toothsome. The crust is almost bagelly, because of the steam, I guess, and it was just delicious. It got a unanimous thumbs up from the family (though not Mr Horseradish, Blackbird Bread; he wasn't around at the time ;-)). I am hoping that all the alcohol had cooked off and that my children were not just approving of it in a drunken 'No listen, you know, I really love you, honesht' sort of a way. 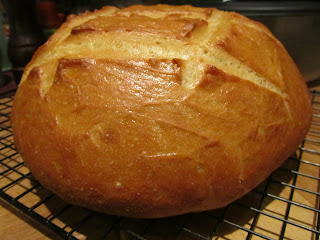 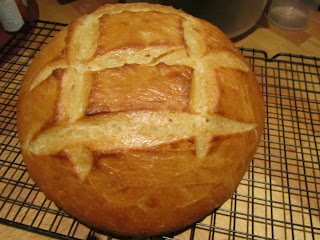 Remarkably, we managed not to wolf the whole lot in one sitting, so I had more toasted this morning with marmite, and both breakfastboys demanded a packed lunch made with it for school. So, every last scrap eaten up. I'm just hoping it won't make the children smell of beer all afternoon.

I'm a convert back to kneading my own. Next thing you know it'll be sourdough starters...