BE WARNED: the photos in this post are not for those of a nervous disposition.

<tootle of trumpets> MrB, he of the tight-fitting lycra, has suggested that I write a post about his super-nutritious breakfast smoothies. If you thought the fruit salad was healthy, just check this one out. You have no idea.

MrB, as regular readers may know, is an extremely keen cyclist. His new year resolutions mostly involve something called 'my training schedule'. This means that he slips away under cover of darkness and spins about the roads of South Lanarkshire before returning and downing a pint or two of stuff he has whizzed up in the blender. This is apparently doing him no end of good. I'm expecting him to develop the ability to fly at any moment. In the meantime, he's certainly looking rather buff, so it must be doing him some good. It also tastes pretty good, and smoothies have to be about the easiest way to get a dose of goodness down your neck.

So, if you are on a 2013 up-and-at-'em style health kick, or if you have tumbled out of bed with only 5 minutes to catch the train, you could do worse.

Now (Jennifer Aniston hair flick) the science. Please note that I am not a nutritionist. But I quizzed MrB. Please note, he is not a nutritionist either. He probably googled all this, or read it on the back of a packet or something. Please consult your doctor if you are starting to exercise and before taking anything that you are unsure about.

As you get older, you need to up your intake of anti-oxidants to help your body get rid of free radicals. These can actually be exacerbated by vigorous exercise, so the idea is to mop them up with some help from your diet. You also need to reduce the acidity of your blood, to avoid muscle wastage.

Anyway, here you have it. The secret of eternal youth. Apparently. 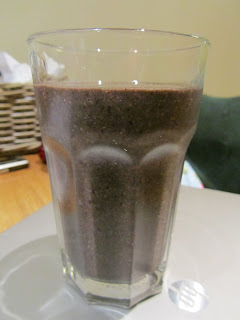 Frozen fruit - your choice of what, depending on what you like (we have forest fruits, mangoes, cherries and summer fruits in our freezer). Mr B Says that cherries are marginally less nutritious than the others, but it doesn't matter really. Go with what you like or what's available.

Coconut water - you can get this in cartons in Holland and Barratt and Whole Foods market. Use as much as you need to get the right smoothie consistency - it's there instead of water or milk to loosen things up. If you don't like coconut, don't worry - it doesn't taste super-coconutty.Coconut water is rich in electrolytes - those things that they tell you about on sports drinks - basically the salts that you lose by sweating when you are exercising, and which you need to replace. Oh, and it's fat-free.

Enough of the above to make a couple of pints or so of smoothie. So far, so good. Now:

Milled flaxseeds, almonds, brazil nuts, walnuts and Q10. This is one ingredient - you can buy it in a bag in H&B or online (ours is called Linwoods). So, you don't need to grind it all yourself. I am very dubious as to whether Q10 is an actual thing that you can grind anyway, but that is what it says on the label so who am I to argue? This is full of vitamin E, which declines with age (saggy skin, anyone?) and it's also an effective anti-oxidant. About 2 tbs of this.

Chia seeds. More anti-oxidants here in the form of this wonder ingredient. They are also high in omega 3 (as is the flaxseed) which is frightfully good for your brain. AND they are a very good source of protein, by jiminy. About 1 tbs.

Spirulina powder. Blue-green algae (yum). Rich in vitamins and minerals and protein. I am not sure if this is the same stuff they warn you about at the pond in Rouken Glen with big signs telling you not to let your children fall into it. I'm guessing not. Also avoid if you don't want to turn your smoothie a sludgy green colour. Dry, it looks like something that might come down your chimney. 1 tsp.

Agave nectar: squirt to taste. This is an alternative to honey and sugar: it releases energy more slowly than sugar and is less processed.

Maca root powder (optional). A good source of slow release energy and another anti-oxidant. MrB says it's not particularly tasty, 'like caramelized parsnips' he says, which sound rather good to me, though possibly not for breakfast. 1 tsp. A note of caution though. it's sometimes referred to as 'nature's viagra', which sounds great, but I've read reports of exacerbated PMT, outbreaks of spots etc after using this, so proceed with caution or omit it. Omit this if you are giving the smoothie to children.

A banana (optional) - we include a banana if we're giving smoothie to the kids.

Eye of newt, tongue of toad (optional). Only joking. Don't include these. Whole Foods Market never have them in. 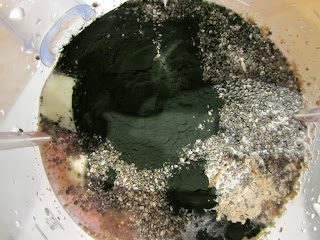 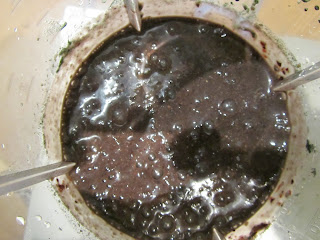 Pretty irresistible, I think you'll agree. As my oldest son so delicately put it over breakfast: 'Err daddy, that looks like diarrhoea!'. Fear not though. It tasted good, I promise.

Whiz it all together in a blender and MrB tells me you'll be full until lunch time and fit as a fiddle, so long as you are also exercising - low impact, aerobic (ah, the rub).

There now, I bet you feel better just reading that, don't you? Now, where are the biscuits?