A fig roll for my Jewish Vikings


I found the breakfastboys in the hall this morning doing battle with a toy guitar and a plastic sword.'It's OK, mummy, we're fighting because we're Jewish Vikings' they informed me, before parrying off down the hallway and round the corner. My roots are in the West Highlands and the North East of Scotland, and my name suggests my roots are quite likely to be with the Vikings. In fact, if you saw the oldest breakfastboy you'd probably put money on it. Apparently though, just about everyone with vaguely Scandinavian looks likes to think they are a Viking, and people are always terribly disappointed when their DNA tests inform them that they are in fact not Vikings at all. So, who knows. Meanwhile, MrB's gang on his mum's side are Eastern European Jews. So, for my little Jewish Vikings, I decided to make some Challah with a twist (don't worry, it's not herring, not even soused herring) - my first attempt at a plaited bread. Also my first attempt at Challah.

Challah (or Chollah, or Hallah) is a celebration bread, and that seemed apt, as it was International Women's Day, so what better way to celebrate MrB's female line than a loaf of sweet honeyed and egged bread to tear apart and share. The plaits represent love, with all those entwined arms, so it's also perfect to eat with your loved ones. Say on Mothers' Day. Say.

So, to the twist. I saw this recipe in Deb Perelman's Smitten Kitchen Cookbook. You may know her blog about cooking in her New York kitchen, and now her cookbook is out in the UK. I've already made a couple of things from it and so far, they've all been hits.The black bean ragout smelled gorgeous all day as it was cooking in the slow cooker. I presented it to the breakfastboys with some trepidation - you know, vegetables, black, etc etc, but the eldest at least wolfed it down and even smallest BB managed a few mouthfuls.

Anyway, this is a challah whose ropes are filled with a paste made from figs and oranges. Not being Jewish myself, I have no qualms about messing with the traditional challah, and I love any kind of fruity bread. The orangy figginess is a real winner here. The link above will take you to the recipe on the blog. I was a bit anxious about the plaiting, but it wasn't nearly as hard as it looked in the pictures, and the fact that I managed to tear a couple of the ropes a bit didn't lead to major disaster either. 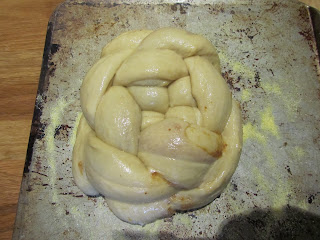 Although figs are most definitnely not a Viking kinda fruit (although apparently they got as far south as North Africa in their roamings, so perhaps they were partial to a fig or two), the act of rolling the paste into the bread dough put me in mind of those fig roll biscuits that we ate as kids. Yum. I managed to squash it a bit by turning it upside down in the oven at the end to make sure the bottom was cooked, so the plaits are not as impressive as they were when it went into the oven. But I'm still pleased with the result. It smells divine and tastes great too. 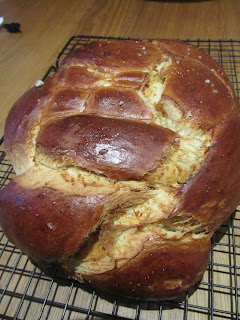 The figgy paste could be used in lots of other things I think - buns and possibly biscuits of some sort - the recollection of fig roll biscuits makes me wonder about some sort of figgy shortbready thing. Will have to put my thinking cap on.

Deb Perelman says that any leftovers make great French toast, but I'm thinking that a suitably Viking (or at least British) take on that might be to use the leftovers to make a bread and butter pudding. What do you think? Orangy, figgy, bread and butter pud with a nice creamy custard, perhaps with a hint of orange too. What's not to like there? That will of course, require us to not eat the whole lot before I get to that point, so don't hold your breath. I'll be back with a recipe if I get that far...
Posted by breakfastlady at 09:25