My mum was visiting last weekend and Saturday dawned bright and breezy, so we decided on a whim to take the breakfastboys over to the Isle of Bute for a day on the beach. For those of you unfamiliar with the geography of the west of Scotland, Bute is a small island at the mouth of the Clyde. That perhaps sounds pretty grim, if your image of the Clyde is of welders and shipyards and rusty old cranes. Well, let me put you right. The Kyles of Bute (the name for the bit of the Forth of Clyde where Bute sits) look like this: Lower reaches of the Clyde. It's kinda pretty. Admittedly, most of the year you can't actually see Arran (that's Arran in the background, with the hills) for the drizzle, or the clouds of midges, but on a good day, it's heaven. And it's less than an hour down the road to Wemyss Bay, and a short hop on the CalMac ferry to Rothesay. In the olden days, Bute was a popular spot for holidaying Glaswegians, who would travel 'Doon the Water' on the Waverley paddle steamer to Rothesay, on Bute. You can, in fact still make the trip, but I have it on good authority that unless your idea of fun is being trapped on a slow-moving boat with hundreds of very drunk Glaswegians, it is an excursion to be avoided at all costs. Don't say I didn't warn you.

Nearly empty mile-long beaches are my idea of a good day out, and the one we visited was particularly good for beachcombing, so while MrB and the breakfastboys were busy building things out of sand and stones, The Dowager Breakfastlady and I collected sea urchin shells and razor clams. The spring green of the fields was exactly like that lovely green in the Glasgow Boys' paintings:

I'm probably making it sound a leeeetle bit more idyllic than it really was - smallest breakfastboy was in one of those moods, and the weather, whilst sunny, was not exactly balmy, but still. Retrospect and a pair of rose-tinted glasses are fine things. 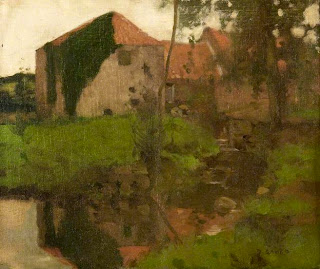 All this talk of beaches is really by way of a preamble to the subject of seaweed. I bought a carton of seaweed at the supermarket the other day. Well, Whole Foods Market, not Tesco, you know. Not only do they sell seaweed, they sell different kinds of seaweed. Yeah. It's supposed to be very good for you, seaweed. It looks good for you, and it smells like the sea, and the sea's good for you, (sharks and riptides notwithstanding), and let's face it, you just know that if the Japanese are eating it, it's going to make you live to 115. Well, my research with the Great God Google tells me that it is the best source of hard-to-come-by-yet-essential iodine, has more calcium than broccoli, is high in vitamin B12 and vitamin A, and is rich in soluble fibre and protein. Hurrah. Now, what am I going to do with it? I'm going to make bread, obviously. I make little else these days. There is a recipe in Richard Bertinet's Dough, but I'm thinking that a beer bread with a briny hint of seaweed might be good. Guinness and seaweed bread, maybe? Or Oats and seaweed? Or Guinness and oats and seaweed? Hmmmm. I'll get back to you when I'm done. In the meantime, here is a picture of my beachcombed sea urchin. 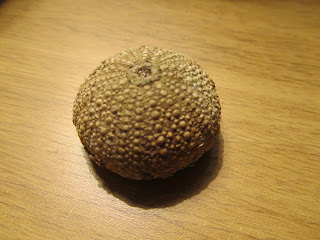 The Japanese eat them as well, I believe, but this one was already uninhabited by the time I picked it up, so you'll have to make do with seaweed.