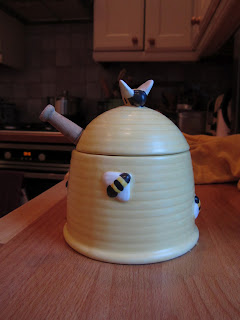 No, not some freaky dog-bee, but the poor old bees of Alsace-Lorraine in France. As if varroa mite, colony collapse disorder and a really lousy summer weren't enough, now this. The bees have been chowing down on waste products from a factory making M&Ms in France, and the resulting honey is bright blue and green. And since most people don't fancy bright blue honey on their toast, the beekeepers are suffering too.

I've been fascinated by beekeeping ever since I read Far From The Madding Crowd as an impressionable teenager. That wonderful scene where Bathsheba Everdene is hiving the bees has stayed with me ever since:

'She had dressed the hive with herbs and honey, fetched a ladder, brush and crook, made herself impregnable with armour of leather gloves, straw hat, and large gauze veil - once green but now faded to snuff colour - and ascended a dozen rungs of the ladder. At once she heard, not ten yards off, a voice that was beginning to have a strange power in agitating her.'

My dad was an entomologist, and we used to go and visit one of his colleagues, a man whom my brother and I insisted on calling Mr Baldabins (his actual name was something far less exotic). Mr Baldabins kept several hives in his garden, and I remember feeling thrilled, a little frightened and very intrigued by all the veils and masks and smoke involved in the beekeeper's magic art.

But bees are really suffering now. Apparently the terrible washout of a summer we've had means that the UK's honey supply is going to be very badly affected, particularly Scottish heather honey, which I particularly love. A tragedy not just for my toast, but also of course for the bees, who need the honey to keep going through the winter. But the bigger picture is even more scary. One third of US hives collapsing for no apparent reason, and the devastating varroa mite are much more of a threat than a winter of highly-priced honey. One has to wonder whether our dependence on pesticides and fertilizers is partly responsible for the decline of the honeybee, but whatever the cause, I do hope they can be saved. A world without bees would be a sorry place indeed.
Posted by breakfastlady at 16:37