The muffin family is a dysfunctional one. We seem to have abandoned 'proper' English muffins in favour of their big, cakey American cousins. It's a great shame. I often buy fruity English muffins at the supermarket - they're great toasted with butter for breakfast. So, I got me to wondering how easy it would be to make a muffin, and last night I rolled up my sleeves for some dough making. For a yeasty thing, they are fairly quick, although 'fairly quick' doesn't mean you should get up on a school morning with a plan to rustle up a batch before you tousle your children's little heads and send them off to school. That way madness lies, or at least a very early start. But a couple of hours will see you right.

I turned, as one does, to Elizabeth David for my basic instructions. Her English Bread and Yeast Cookery is a great starting point for everything from Chelsea buns to soda bread.  I suppose you maybe need to have a certain amount of kitchen confidence to be secure with her style of writing - she's not a Delia who will hold your hand through every step; she's more the lead-you-to-the-edge-of-the-pool-and-shove-you-in type. But I like the way that frees you up to do your own thing with the basics. Jazz baking, if you will. She roots up all sorts of fascinating historical bits and bobs about ingredients and methods, which my inner nerd embraces wholeheartedly. Her discussion of muffins and their cousins the crumpets is exhaustive.

I used her basic recipe, with a few tweaks. Hers are plain muffins, but I wanted something fruited, so I flung in a handful of raisins once the dough was mixed. I also added some cinnamon and mixed spice to the flour. I used quick yeast rather than 'proper' yeast. I also think that most people's tastes have become accustomed to less salt in bread nowadays. She suggests using a tablespoon of salt to 450g of flour. I used almost as much as that, as I hadn't tried the recipe before, but they do seem too salty to me so next time I'd probably stick to about a tsp. Finally, she suggests using rice flour to dust the muffins, but I didn't have any, so I thought polenta might do. It did do, though they were possibly a bit crisper on the outside than they would otherwise have been.

Elizabeth David's quantities:
450g strong white flour
15g yeast (I used one 7g packet of instant yeast - I think perhaps less would have been OK)
1 tbs salt (I'd probably use about a single tsp)
1/2 tsp  sugar
2tbs olive oil/lard/butter (I used olive oil)
'rather under' 450g mixed milk and water (I used half and half)
rice flour for dusting (I used polenta)

See what I mean about the instructions? What does 'rather under' mean, pray? I bet the technical challenge in the GBBO is a bit like this.

The first step is to warm the flour in the oven. I have no idea what this does, if anything, to the flour, but I guess it would give the yeast a head start when it's added. The book insists that it makes all the difference to the finished muffin, and who am I to argue? Then this is mixed to a soft dough with the rest of the ingredients, the water and milk having been warmed with a little olive oil first. Now, when I say soft, this is  really soft.  I could have hung wallpaper with it. I added more flour to make it even a little bit manageable, but it was still pretty wet. Anyway, leave it to prove - covered -  for about 50 minutes and puff! Here it is, before and after the 1st rise. I never fail to be amazed by how that happens. 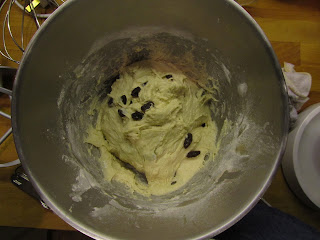 Then, and here's really the sticky bit, knock it back and form it into 7 or 8 muffins, using the rice flour to prevent it sticking <hollow laugh>, at which point the phone will invariably ring. Ignore it. Once you are unstuck, lay the muffins on a tray dusted with more of the flour, then cover with a cloth and leave for about 35 mins to puff up again.


Then transfer a batch carefully to a warm pan or griddle and cook slowly for about 10 mins on each side. Keep them warm under a cloth or in a low oven while you cook the rest. And presto! Home-made muffins! What do you think (if you can tell from my photos)? They got the thumbs up from my discerning breakfast audience anyway. 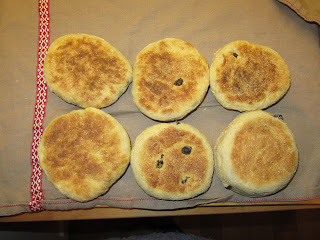 Almost as easy as the other, more ubiquitous kind of muffin, which as any fule kno, is the easiest thing to cook in the whole wide world. They also puff up a little in the pan in a rather pleasing way. Big smooth doughy domes.

One great thing about bread cookery is that all the waiting about means you can pootle about doing other things. I found myself leafing through Dan Lepard's Short and Sweet, where I found another recipe for English muffins made with cider vinegar and natural yogurt. They sound very good, and quite different from these ones, so I'll try them next time and let you know the verdict. I really love Dan Lepard's writing, but I haven't as yet made a huge number of things from this book. Interestingly, he says that while we've been busily scoffing supersize double chocolate American muffins, bakers in the US have taken English muffins to their hearts and perfected the art of cooking them. Go figure.
Posted by breakfastlady at 14:50