This has just plopped onto my doormat, and I want to share the frankly terrifying cover with you. It's an old book by F Marian McNeill that I've been wanting to get hold of, as I keep coming across references to it. What is going on with that cover though - she looks like something out of The Duchess of Duke Street. Mob cap? Check. Frilly apron? Check... Ach, that'll do. Never mind the period hairdo or crockery. 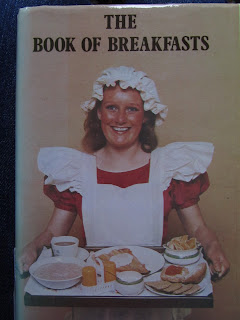 By the wonder of Amazon Marketplace it has arrived. Printed in 1975 (originally written, I think, in the 1920s or 30s), its previous owner was Daliburgh library on South Uist, and it appears to have been borrowed a mere four times since they acquired it. But it looks great. If anyone's after a recipe for 'crappit heids' (haddock heads and livers in oatmeal) or pickled tongue, Marian McNeill is your go-to cook. But, head-based food aside, it looks like a fabulous book, and I'm planning to curl up in front of the log burner on our holidays next week for a good read.

Meanwhile I leave you with some post-punk nonsense from my mis-spent youth. Who says the 80s were boring?

I recommend forwarding to about 2m 15s. Be advised however, that this will be your earworm for the rest of the day.
Posted by breakfastlady at 12:15