On a brighter note, we went for a lovely woodland stomp in the Trossachs yesterday. I was hoping to get enough blackberries to make some blackberry and apple jelly, but the pickings were slim. I blame Hugh Fearnley-Whittingstall. Those woods had been foraged to within an inch of their lives. So, no jelly, but there were quite a few blaeberries (bilberries) still, and together with the blackberries we did find, and some nice cooking apples (foraged from Sainsburys), there were plenty for a tip-top crumble. And aren't they pretty? 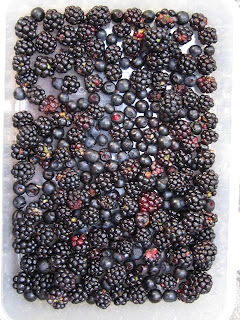 I'm still thinking about the jelly (by which I mean jam with no lumps rather than wibbly jelly). I have loads of rhubarb in the freezer that my neighbour kindly gave me in the summer. I've already made jam with some of it, so I'm thinking perhaps rhubarb and orange jelly. It would probably be prettier with that gorgeous pink new season rhubarb in late winter, but it's maybe worth a try. By the way, if you've never made jam with new season rhubarb, I urge you to have a go. It's the most delicious thing on soft white bread - almost fizzy, and the prettiest jam of all.
Posted by breakfastlady at 10:38