So, to the results of the American pancake experiment. Ms Walker gives two variants on pancakes. The first is fairly similar to a standard pancake recipe, so I thought I'd try the second, which is for buckwheat pancakes of the type Almanzo dished up for Pa with ham.

Many years ago, I spent a joyous weekend in Rennes filling my face with those delicious buckwheat crepes that Brittany is famed for, and I'm very partial to a blini, which is probably the closest to this pioneer pancake that I've tasted, as they're also made with a leavening agent and often with buckwheat flour. These rustic American pancakes are closer to their East European cousin the blini than to our regular weekend blueberry pancake. But that's not necessarily a bad thing.

So, to start with, we need (apologies for the US/Imperial measurements. I'm going with these, as I have measuring cups, and <whispers> cups are much easier than faffing about with the scales):
2tbs molasses
1oz yeast
2 cups buckwheat flour
1 cup wholewheat flour
½ tsp baking soda (= bicarbonate of soda)
½ tsp salt
1tbs dripping
¼ lb chunk salt pork
½ cup brown sugar

I'm an inveterate fiddler with recipes, so I adapted this slightly. Firstly I used quick yeast; the equivalent charts reckon that 1oz fresh yeast is approx 3.5tsp. I'm not going to start hunting down salt pork - it's only used in the recipe to grease the pan, so I figure I can live without it. I used bacon fat instead, as I fried up some bacon to go with the pancakes.

The recipe starts with an overnight sponge.  So, start by mixing the molasses with ½ cup of lukewarm water and then sprinkling the yeast on top. After leaving that for a few mins, add another 2 cups of water and both flours. Then cover with a cloth/clingfilm and leave overnight.  If you have a particularly warm kitchen (over about 20˚C at night), refrigerate the mixture. This is not a problem I ever have, sad to say. Here's my sponge:


I returned an hour later to find it like this: 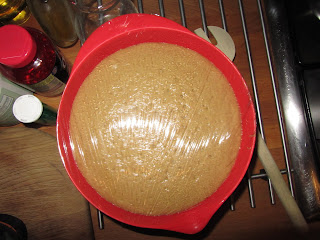 I was expecting to come into the kitchen the next morning and find it making its way across the kitchen floor. But in fact it had dropped back a bit and was looking lively but a bit more subdued. Thank goodness.

Next day, remove 1 cup of the sponge (you can keep this refrigerated and use as a starter for another batch if you like). Dissolve the bicarb and salt in ½ cup hot water and add the dripping/lard, then beat this into the sponge until well mixed.

Heat your griddle or pan (Ms Walker puts it so nicely: 'until it makes water drops dance') and then grease the pan (with the salt pork if you have tracked this down). Then cook as for a normal pancake. Traditionally, the first pancake is a 'blanket' pancake, that can be used to cover the pile as they are prepared, and is bigger than the rest. As the pancakes are stacked, sprinkle some brown sugar on each. The recipe says that this quantity makes about 24 3-4" wide pancakes. Even at their most ravenous, my family wouldn't eat that many, but I made larger pancakes and found that the quantities weren't outrageous. My mum was here too, but she's not exactly Desperate Dan when it comes to quantities. 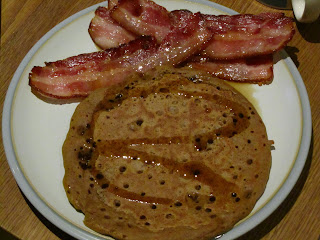 The finished pancakes are darker than regular pancakes, and heartier, but got a resounding thumbs-up all round. Smallest Of All even discovered that he loves bacon (especially when it's slathered in maple syrup, I dare say, but anyway, it's some sort of result to get them eating anything new, to be honest). No eggs or milk, so definitely a more rustic kind of affair, but if my poncy lot will eat them with any degree of enthusiasm, then I'm sure they must be quite good.

Just the thing if you're heading out west. Which we were, as it happens, but not quite as far as Dakota. Happy trails!

Next time, Moomin-style pancakes, with pine needle sauce (I jest).
Posted by breakfastlady at 18:24