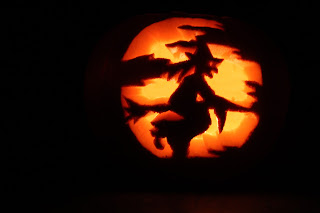 You've got to go to the US for a Halloween breakfast, right?

When I was growing up in England, Halloween was no big deal. We paid lip-service to trick or treating, but it mostly consisted of ringing people's doorbells and running away, because we knew that nobody actually had treats to give us.

We Brits tend to think of Halloween as a US interloper, but here in Scotland it seems always to have been a much bigger deal than in England. Think Macbeth's witches hubbling and bubbling up there in Cawdor. And they've always carved lanterns. Scotland doesn't really have the ideal climate for growing pumpkins, so they used to use turnips (not the little purple and white jobs, but what the English call swedes. The bigger orange-yellow fleshed neeps that are traditionally served with haggis and tatties). Have you ever tried carving a lantern from a rock-hard vegetable? I am frankly surprised that anyone from the pre-pumpkin generation in Scotland has any fingers left with which to carve anything. This is one US import that has most definitely made life easier.

Anyway. What to do with all that pumpkin flesh? Usually, I make soup. A German relative showed me a delicious pumpkin soup recipe that uses a pinch of ground cloves as its secret ingredient. Perfect with some good bread. However, this year, in honour of Breakfast Club, I thought I'd make some pumpkin muffins. Muffins, on this occasion, being the cakey American kind.

I will at this juncture make a confession. The joy of a muffin is that it is the quickest and easiest thing on earth to make. So simple that a toddler could do it. All that is required is a knowledge of the difference between 'wet' and 'dry'. You remember that character Ria from 70s sitcom 'Butterflies', played by Wendy Craig? Even she couldn't get muffins wrong. However, if you first have to carve and cook the pumpkin it sort of loses that 'look what I just flung together' thang. I was prepared to go the extra mile, having failed to locate canned pumpkin in the 5-acre Sainsburys up the road, but when my glance fell upon a jar of organic pumpkin puree in the glorious Whole Foods Market in Giffnock this morning, well. What's a working woman supposed to do?

This recipe is based on one from my go-to muffin book, Muffins Fast and Fantastic by Susan Reimer. I highly recommend it. Makes 10-12 standard muffins. 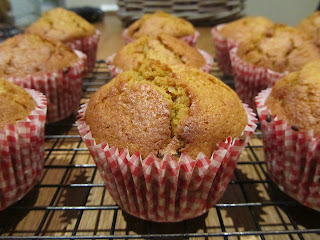 Notes: if you can't find tinned/jarred  pumpkin, cut and peel a butternut squash, or use your pumpkin flesh, assuming you have not bought one of those pumpkins rather dubiously called 'carving pumpkins' in the supermarket. I'm guessing they don't taste so good. Remove the stringy pulp and seeds, then cook chunks in simmering water until soft (10-15 mins). Drain and discard the liquid. Puree in a processor. A regular 800g squash will make about 500ml of puree - you can freeze half if you like.

Somewhat counter-intuitively, raisins tend to make the mixture drier, as they absorb liquid, so I tend to use the lower end of the quantity given if using dried fruit, and the higher end for nuts, which are oily and don't absorb liquid in the same way.

You can use granulated sugar instead of caster sugar. I like the caramelly flavour of golden caster sugar in cooking. You can also use vegetable oil instead of olive oil, especially if you prefer a more delicate flavour. Do not, in any case, use a hefty virgin olive oil but one of the lighter (cheaper!) types.

2. In a large bowl, sift together all the dry ingredients: flour, baking powder, bicarb, salt, spices, sugar. Confession #2: when recipes say 'sift together', I generally stick my fingers in my ears and go 'blah blah blah', then just spoon it together and stir it up a bit. I hate washing sieves.

3. In another bowl beat the egg, then add the milk/water, pumpkin and oil/melted butter and stir well.

4. Tip the wet stuff into the dry stuff and mix it together until just combined. Don't overstir - just mix till you have no dry flour visible then stop. Add the nuts or raisins with your last couple of stirs.

5. Spoon into the muffin cases. Bake 15-20mins until tops are springy when you press them gently.

My children will be delighted to be given cake for breakfast, while I will be sending them to school safe in the knowledge that they have in fact had vegetables for breakfast. Isn't that just fiendish? Mwahahhahahahaha! 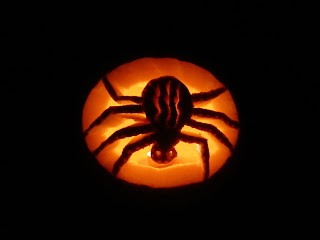 Come and join the Mumsnet Halloween bloghop!
Posted by breakfastlady at 09:37